Note: This post is rather long and photo heavy. Sorry!

So, I quit my job a few weeks ago. It was a good job with good people, Â but I found myself wanting to spend more time on my data-sciencey coding stuff, and less time actually doing the day-to-day duties of an analyst. I know that if I had continued on, I could have done a few pretty cool projects, but it seemed like a good time to go. I had been doing work all day, school all night for almost a year. I was burnt out. So I saved up enough money and quit. I’m doing a web development bootcamp, and hope to start looking for a job in 4 months or so. But all of that is for another post. 🙂

Anyways, Ryan was going to a conference in Tokyo about a week after my last day at work, and he joked that I should tag along. Just for fun, I looked at tickets to see how bad it would be. Surprisingly, I found tickets at ~$500 and under! These were flights on a terrible airline with terrible layovers, but hey, it seemed like fate. I couldn’t NOT go.

So the cheap tickets were worth it, but man I had to work for it. Getting to Tokyo took 30+ hours, and included a rainy layover in Shanghai. The food on China Eastern was terrible even for airline food, and gave me some weird stomach ish.

Even though I was feeling tired, I pushed myself to go into the city, had some fun, and then I got stranded! It took a couple tries and several hours, but in the end I was able to get back to the airport via black cab. Of course that is not safe, so don’t do that. Once I made it back, Â I barely slept on an airport bench, with my head on my luggage, avoiding the airport’s bright fluorescent lights, wondering what I was doing with my life.

Given that the China leg ofÂ my trip was so unpleasant, being in Tokyo has been a dream. The food has been divine, and the dollar is strong here.

It seems that Tokyo is similar to San Francisco in that it can be a totally different city depending on who you are and what you’re interested in. I am interested in food, robots, culture, and kitsch, so that’s what we did.

Of course we saw Meiji shrine. I felt bad for the wedding processions, who had their pictures taken by tourists. So rude.

We visited the statue of Hachiko, the dog who would meet his master at the train station every day when he got home from work. The owner died, but Hachiko kept coming until his own death ten years later. I thought this was a myth, but it actually happened????

We wandered around Golden Gai, home to dozens of tiny (4-5 seats) themed bars. Didn’t end up going in because I was feeling crappy, but it was really cool.

We visited Akhibara, home to “Electronics Town” and an otaku paradise. Seventeen-year old me would have freaked out and spent a fortune on manga and stuffed toys, but I had incredible restraint that day. They closed off the streets for pedestrians, which was nice.

We ate at an automated sushiÂ restaurant. Order on screen at your table, sushi comes to you. Puts conveyor belt sushi to shame. I ordered all the weirdest things I could find on the menu, including corn and mayo sushi, cheeseburger sushi, and some sort of mayo fries. Unfortunately the cheeseburger sushi was funky, but everything else was tops.

We visited Blue Bottle’s Tokyo location. I noticed that a rambunctious toddler lost her moccasin over the railing into a neighbor’s gated yard. While we drank coffee, the mini drama unfurled. At least four people were working together to figure out how to retrieve the shoe. It looked like you couldÂ have just hopped the fence, or slipped through, but I guess that’s not polite?

Not ashamed to admit that the top of my to-do list wasÂ Robot Restaurant. It’s Â basically a neon cabaret with bikini-clad women dancing on top of robots. It did not disappoint.

There were several sets. The first set was about a dozenÂ people taiko drumming, chanting and dancing while dragons and oni circled the stage. I thought it was a nice touch, melding the past with the blinding neon present. 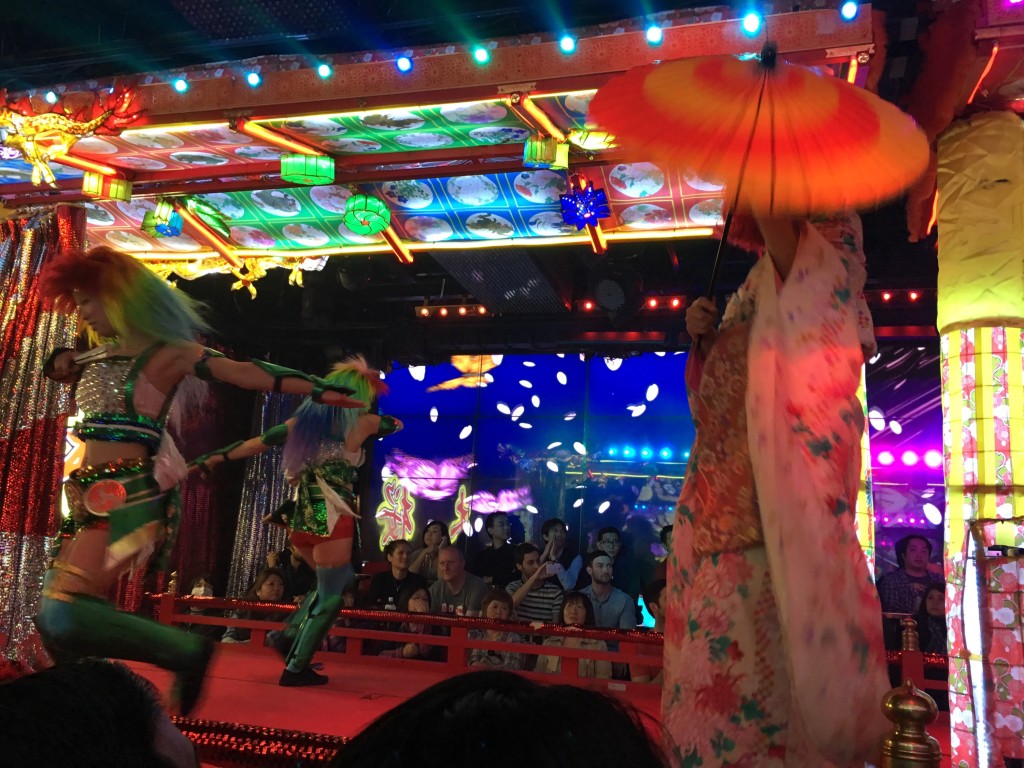 The second set was my favorite. It had more of a storyline- once upon a time there was a peaceful kingdom, and then aliens showed up to fuck shit up. There were epic battles which included a panda beating a cyborg’s ass, and a mermaid firebombing an alien.Â Â Â 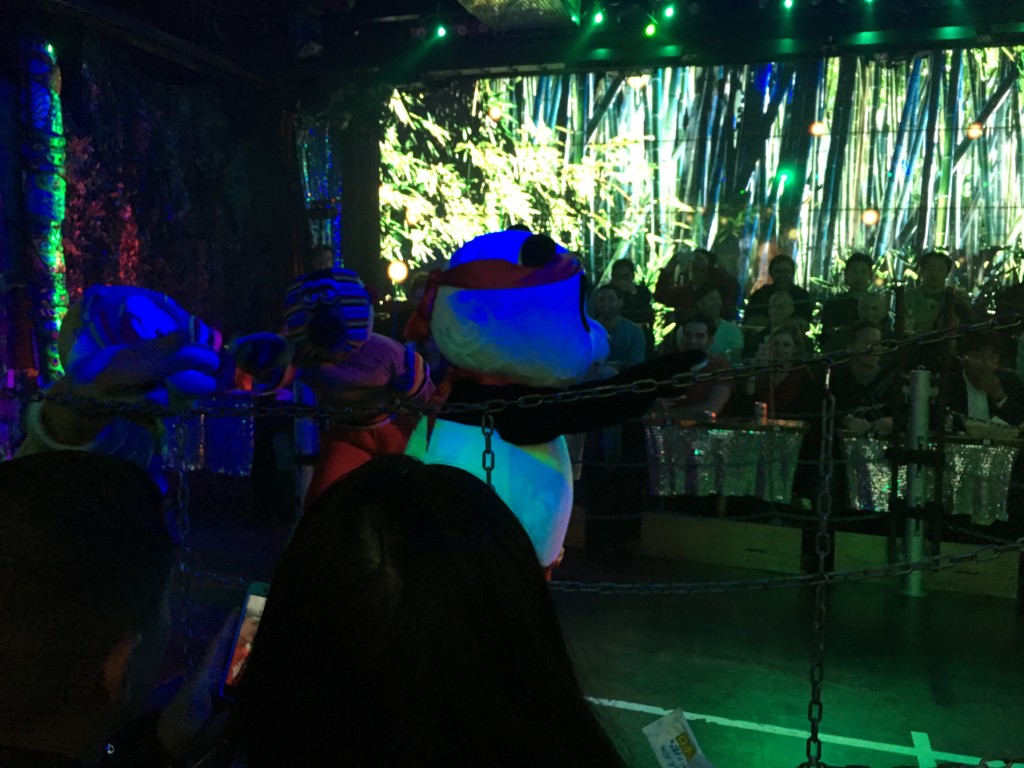 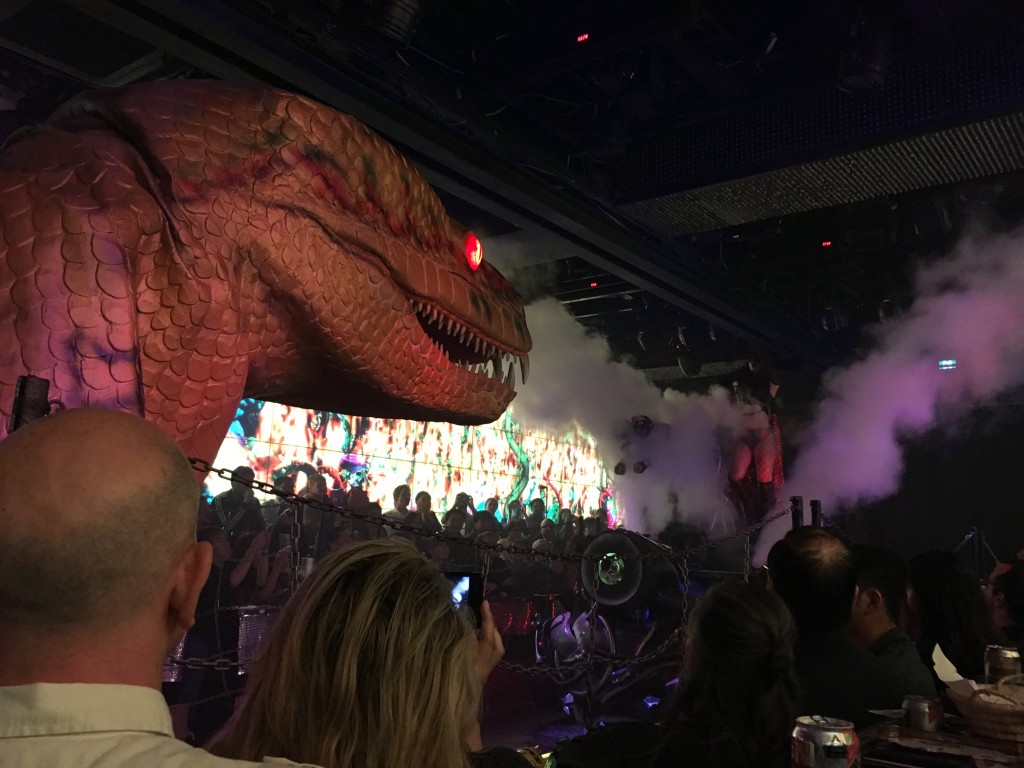 The last set was a general parade of happiness. Not sure how else to describe it, as I couldn’t understand the lyrics. Something about “all you have to do is dream???”

Anyways, this post ended up being way longer than I expected. Time to grab some dinner and hit the streets!

4 Comments to “Hello from Tokyo – Part I”