Fall is here. I know because Trader Joe’s won’t let me forget. They’ve really bet the house on pumpkin spice. But also it’s that magical first week in October, which means it’s Fleet Week AND there’s the Hardly Strictly Bluegrass festival. So tons of sailors are roving in packs all over town, and bluegrass fans will soon be swarming Golden Gate Park. There’s a buzzy energy in the air right now. Biking around in this weather feels great. 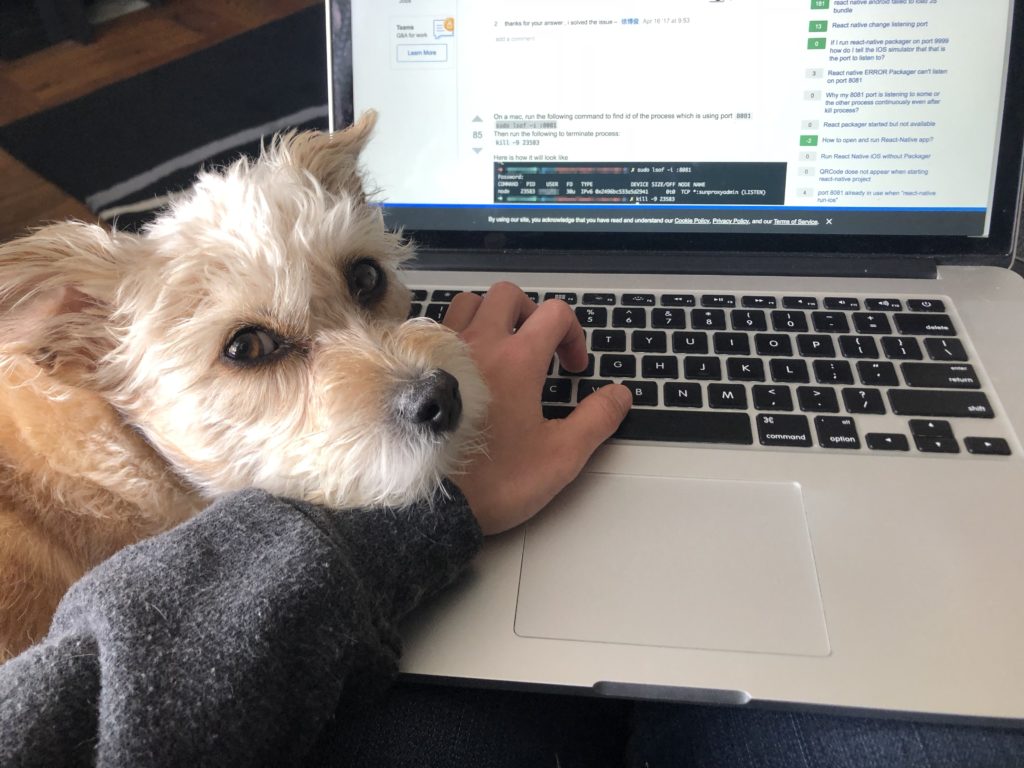 I don’t think I’ll be able to go to the festival or even a friend’s birthday party because I’m dogsitting, and Hopper is pretty needy and whiney. Can’t even write this blog post! He wants attention. This is a two week gig, which I feel like I regretted immediately after accepting. I always book these sittings in the hopes of treating it like a writer’s retreat. Go hole up in a big apartment in a sleepy part of the city, be focused, and knock through my to-do list as best I can. It never works out that way.Â Since I got home from work today I’ve watched a Lady Gaga documentary and made a chocolate cake mug(or is it ‘mug chocolate cake’. Wait it’s ‘chocolate mug mix’, what?). Now it’s almost bedtime. Where did the time go?

Having long stretches of time where I can do anything often leads to me doing nothing. The same thing happened when I went to North Carolina with Ryan for a week. I had high hopes of working on some personal projects, but it just didn’t happen. I returned home refreshed and newly interested in paddleboarding, but also feeling guilty for squandering the time.

That was nearly two months ago!! and I still haven’t made progress on my side projects. I’m feeling worse and worse about it, which is no good. It’s completely artificial pressure. I need to figure out a more realistic way to move forward and be productive, at least a little bit every day.

In general since about April I’ve been in a weird place emotionally, mostly due to work. April started a period of being bounced around from project to project, having to ramp myself up on a new codebase and fit in to a new team (or company!) each time. I was on Project #1 from April to June. Then for a week or two I worked at another agency, pitching in at the last minute on a high stress launch. I came back to the first project after that. Then from the end of June to August, I did staff augmentation at an entirely different company. Then at the end of August I finally came back to Grio for Project #4, but we moved offices, so that was also different.

Changing projects in April was incredibly disorienting, which I suppose was to be expected because I was on my previous project for nearly a year. Then heading in to be a contractor at other offices, it felt like I didn’t even work at my company anymore. I saw my coworkers like once or twice a week when I came back to the office for free lunch.

It takes me a few weeks to feel like I’m up to speed on a project and starting to really contribute, and when I’m changing projects every 6-8 weeks, I don’t get very much time to feel good about the work I do. Mostly I’m just stressed out trying to prove myself, I have a few weeks of rocking it, then it starts all over again. Currently I actually feel pretty optimistic about my new project. There is the usual deadline stress, but I’m working with people I like and learning React Native, so at least I’m growing.

What else..? I was incredibly saddened when Anthony Bourdain died. My food and travel hero, RIP. I was up extra early, picking up my bicycle at the shop when it came over the radio. It just felt so surreal. I stayed away from all the news, and even now I can’t bear to watch any Parts Unknown episodes on Netflix, even though I know they’re going to take them down soon.

I still think about it from time to time, and it worries me that you can fight your whole life against depression, live what appears from the outside to be a meaningful and fun life, and still not make it. I don’t get as depressed as often as I used to thanks to bupropion, but I’m terrified of going back. What if it stops working? My depression was never that bad, but I don’t want to go through feeling down like that ever again, especially since now I know that I don’t have to.

Travel to see friends and family has been happening steadily. Spending time with my people has added some reassurance to a generally unstable time work-wise. In July we went to the Yuba River with friends. We stayed in a really nutty Victorian house that had some terrifying bedrooms. Ryan almost drowned. Nobody got sunburned. We broke an oven door and were losing puzzle pieces down the sink. 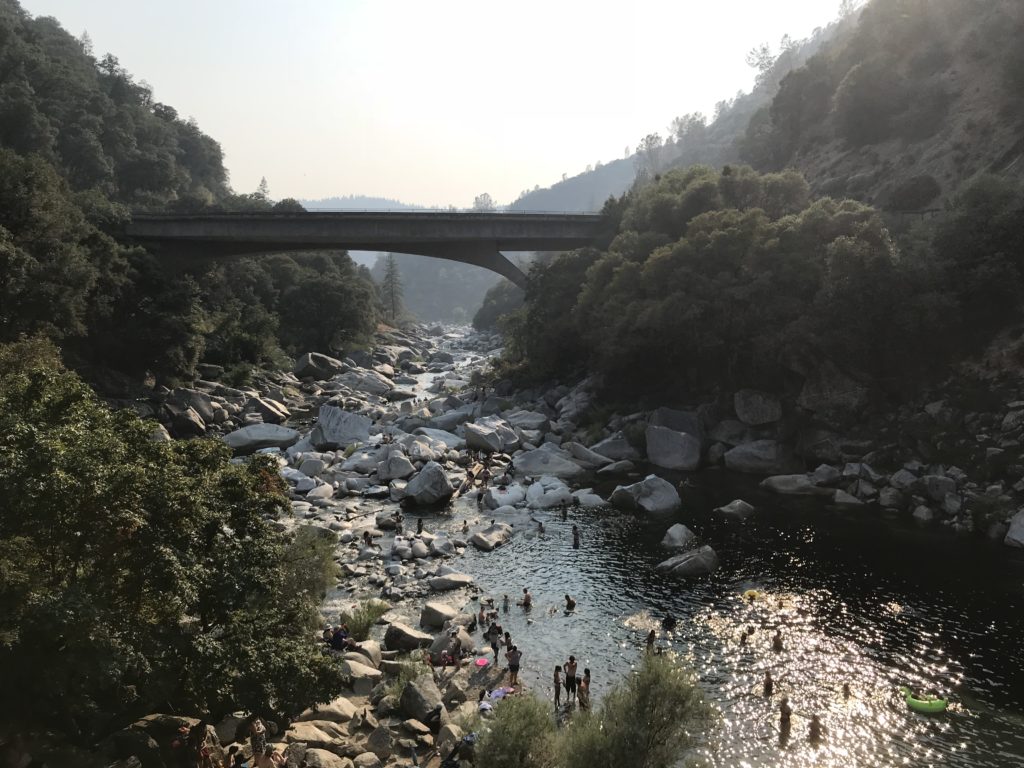 August was North Carolina with Ryan’s family. My racism antenna was on as soon as I saw my first confederate flag on the highway. Ryan thought that these people were neo-nazis because of their license plate (looks like NO 88), but no, they just went to Duke. Phew. 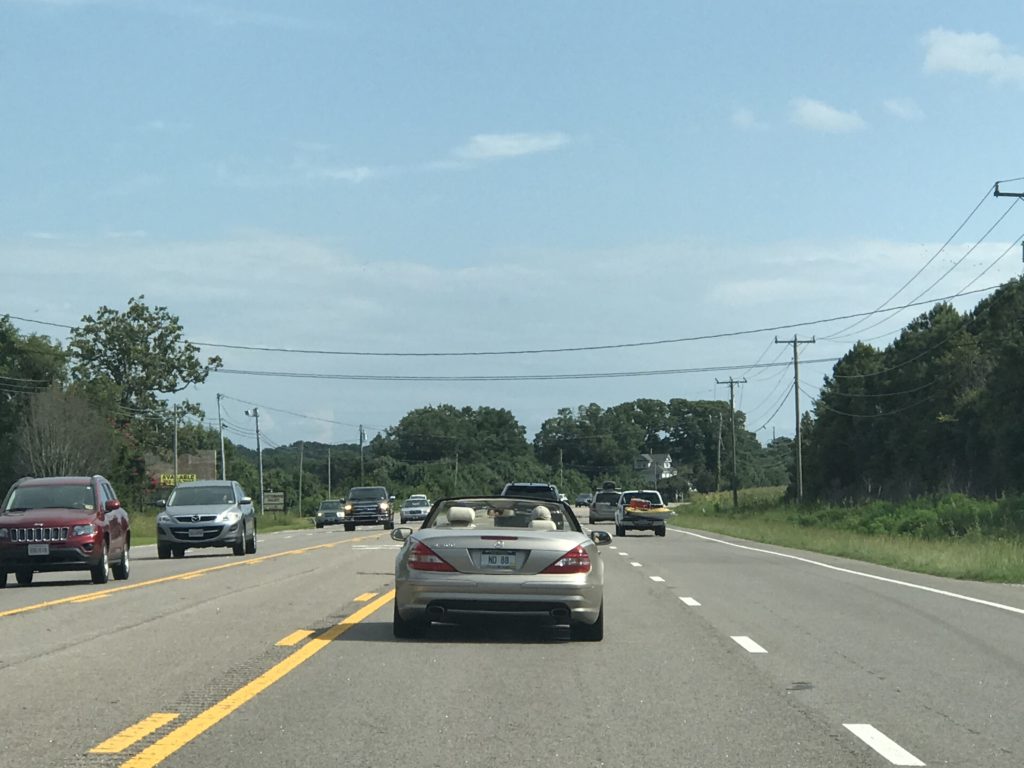 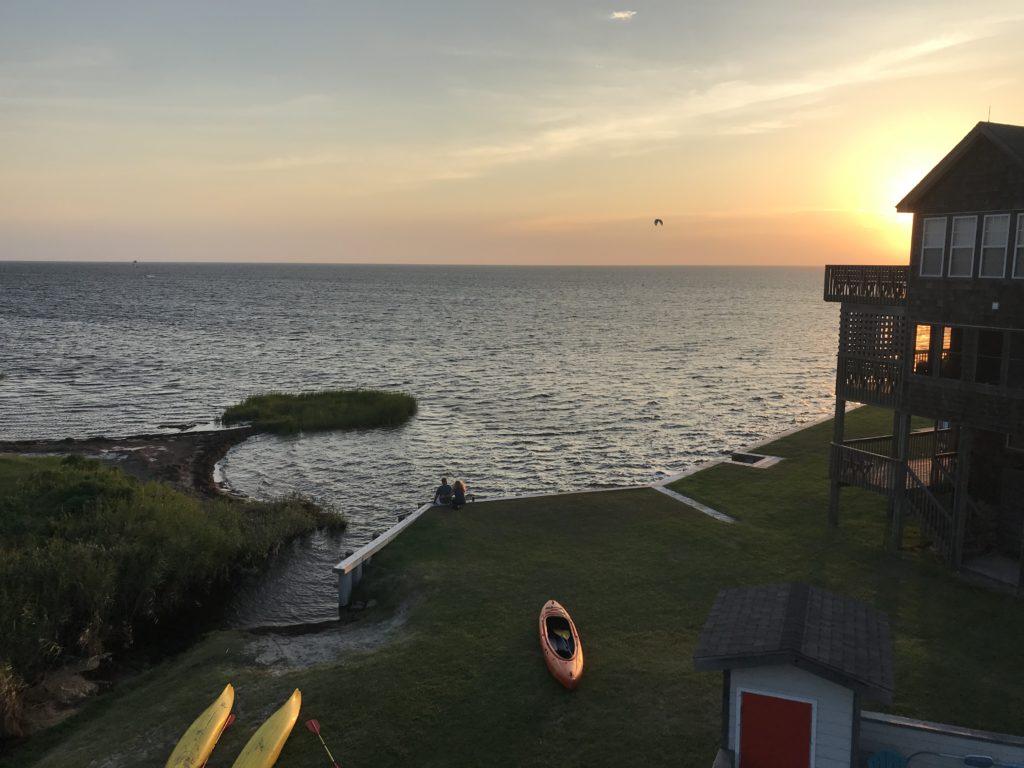 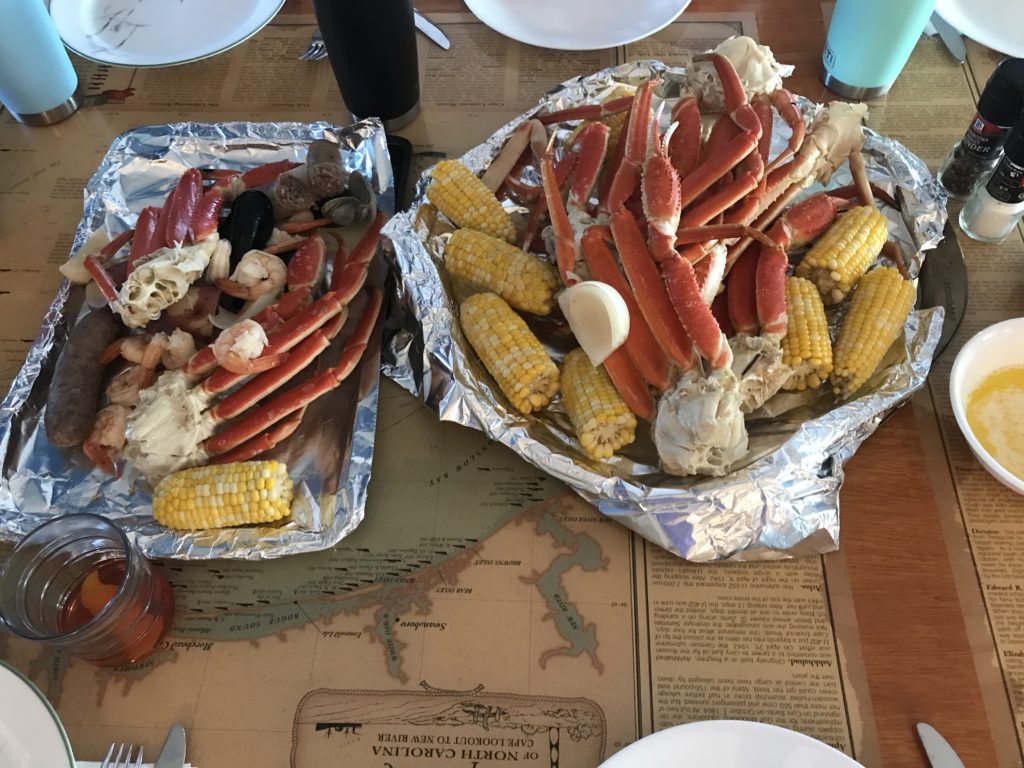 There was lots of food, and lots of time in the water. Ryan and I bought a puzzle one of our first days there, and we were able to complete it by our last night. 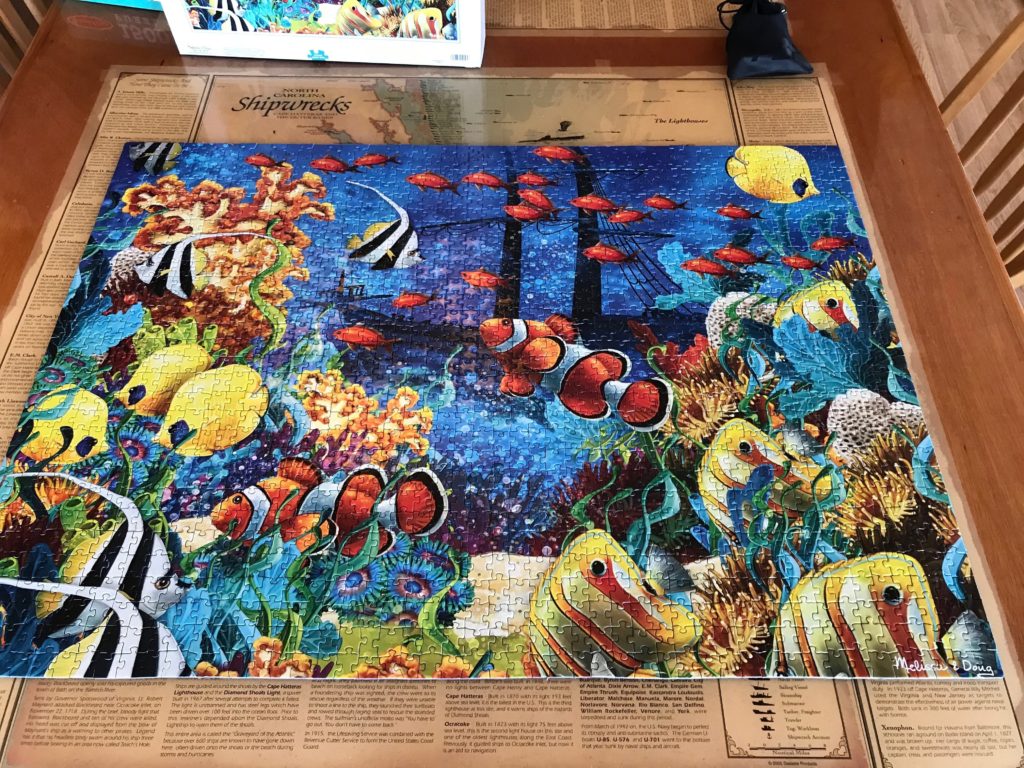 Before we left we went to a BBQ place that according to one Google review had a picture of a grand wizard on the wall. Walked all over the restaurant very casually eyeballing every frame and couldn’t find it. The BBQ was great, so I really hope that review was bogus.

Went to Los Angeles in early September. It was fairly uneventful, I didn’t even take pictures! I guess it’s nice that seeing my family doesn’t have to be a big eventful thing. I’ll be headed back there in November and December as well.

Puzzles. Ever since the encounter with puzzles in Oak Harbor, puzzles have been a mainstay, both on the road and at home. We’ve been ordering our puzzles off of Amazon, and have leveled up to using this puzzle wrapper thingie that lets you roll away your puzzle when you’re not working on it. You can see it below in the New Yorker puzzle. It’s pretty low tech (a big piece of felt, a cylindrical balloon and some elastic bands to hold it together), but it works! I was thinking of starting a puzzle club to share my puzzles with friends, since how often do you do a puzzle the second time?

Ryan did this insane 2000 piece Times Square puzzle all by himself.

Well ok now I reaaaaallly need to go to bed. Til next time!