I tried uploading some trip photos to WordPress from my phone the other day, and ended up accidentally posting a blog post, so sorry if you saw my garbled mess of photos in your feed!

Despite having even less of a plan than I did in NY,Â I was pretty excited for the Philadelphia leg of the trip. We went by bus since it’s so close, and being at Port Authority was like New York saying “Get the hell out!” It was just miserable, mostly because I walked in on a lady in a bathroom stall (door wasn’t closed, let alone locked). Â The cleaning lady didn’t warn me at all as I was walking by her (she totally knew)! Â In general the terminal was gross and depressing, but aren’t all bus terminals? I did spot a blog celebrity, which was exciting, but then I felt kind of embarrassed for recognizing theÂ person at all. I should get off gossip sites and read more.

It was a short ride, but for some reason once we got to Philly I was exhausted. We ventured out to a little bar a block away from the hotel, and I had the first real meal that felt like it was worth the money. Brick and Mortar’s crispy fried pig ears were crunchy and delightful, my rotisserie lamb was solid, and the dessert (some sort of british pudding cake) was rich. Cocktails were perhaps a little too sweet, though.

The next day weÂ strolled over to Reading Terminal Market and had breakfast at a greasy spoon called Dutch Eating Place.Â The line was intimidatingly long, but turnover was quick. 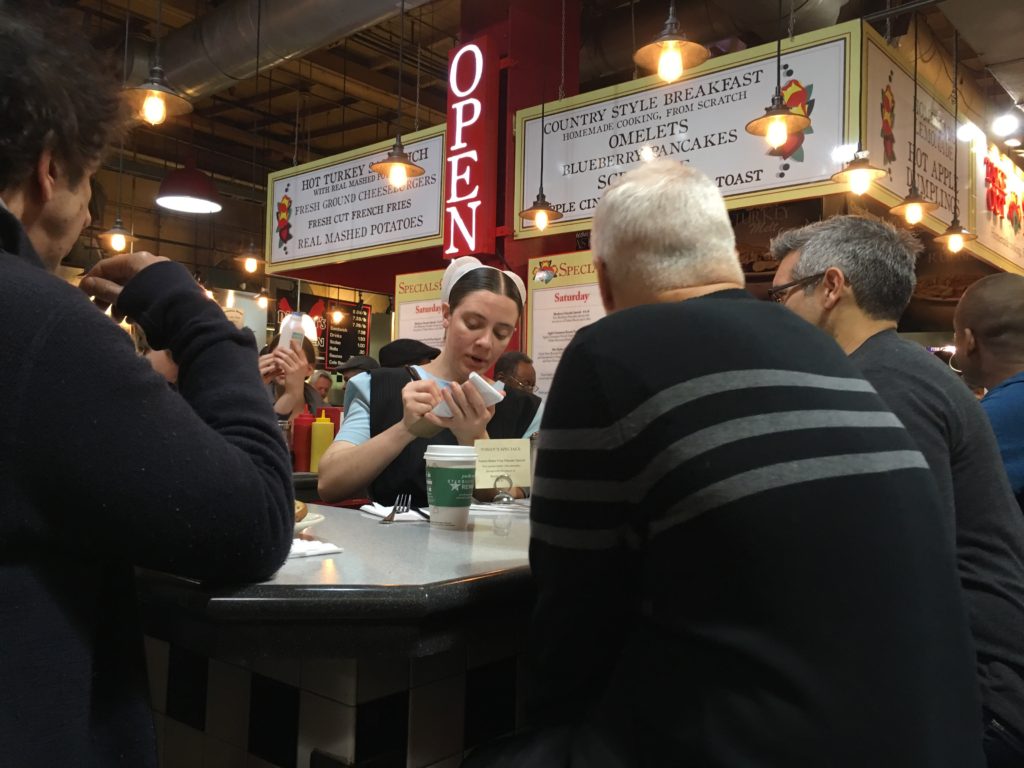 I saw “scrapple” on the menu among the breakfast meats and thought that I would try it. From my first impressions,Â it’s like polenta made with pig scraps. I like the idea behind it, but it didn’t taste like much at all. 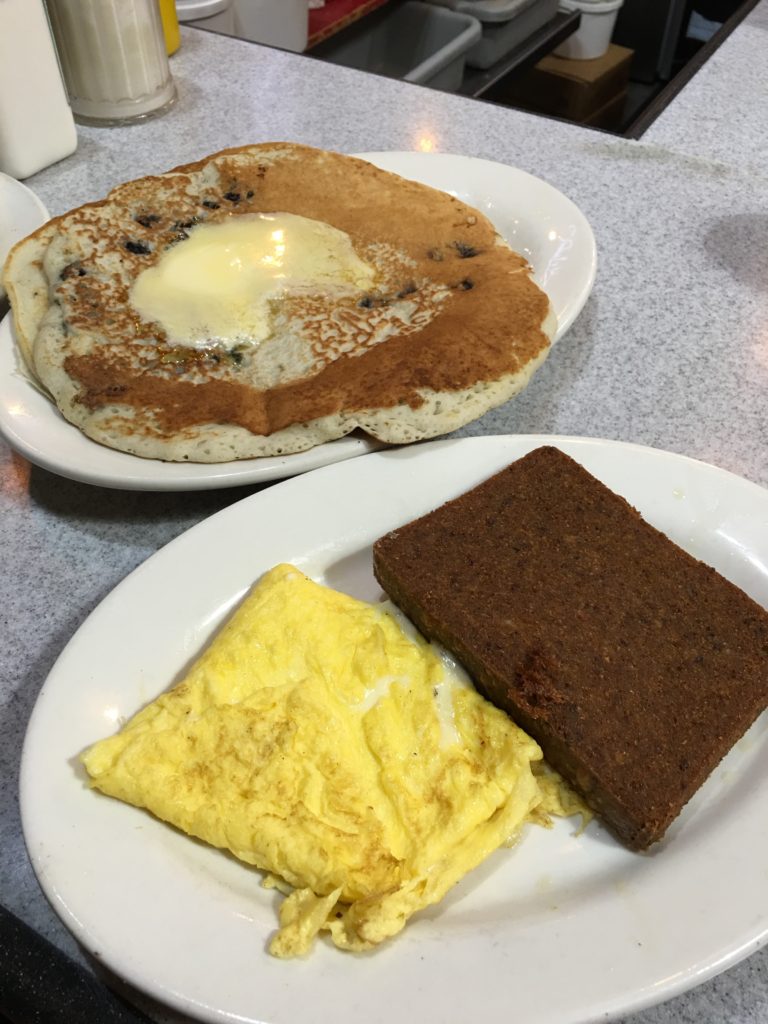 Yelp reviews suggested the famous apple dumplings, so we went ahead and got one for breakfast. It was pretty neat – a whole apple baked in a pastry (you pour cream on top), but it was way too early for dessert.Â I was already starting to feel bloated and gross by this point. 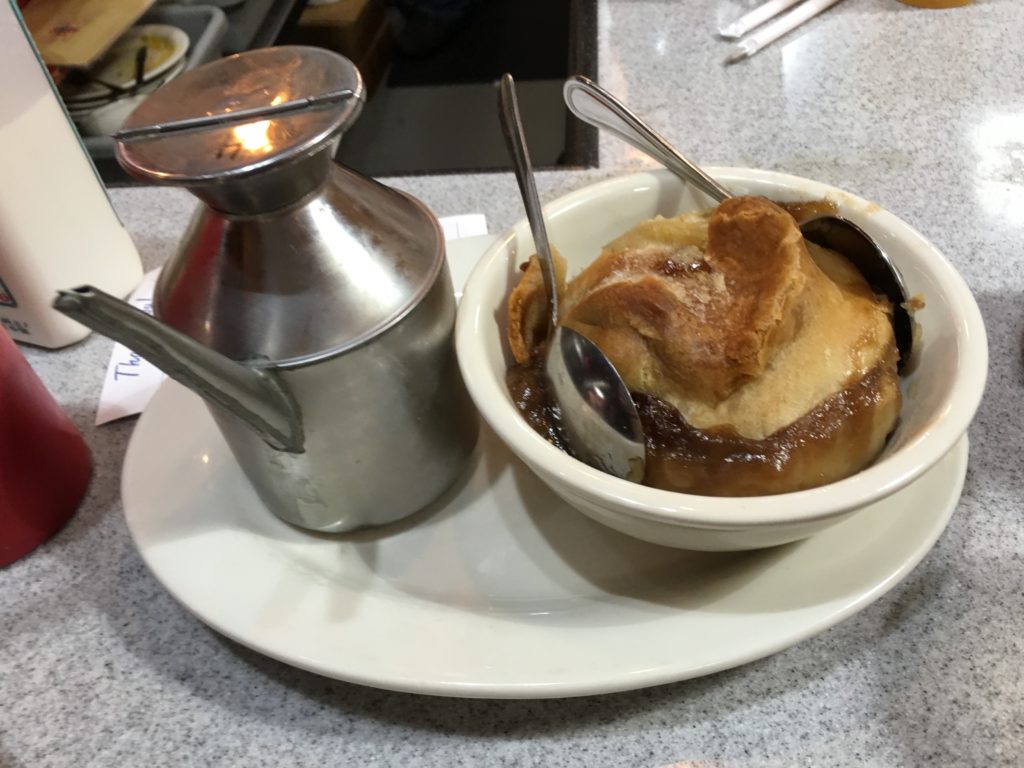 So many kinds of “bread” Â were for sale: pizza bread, strawberry bread, bacon egg and cheese… 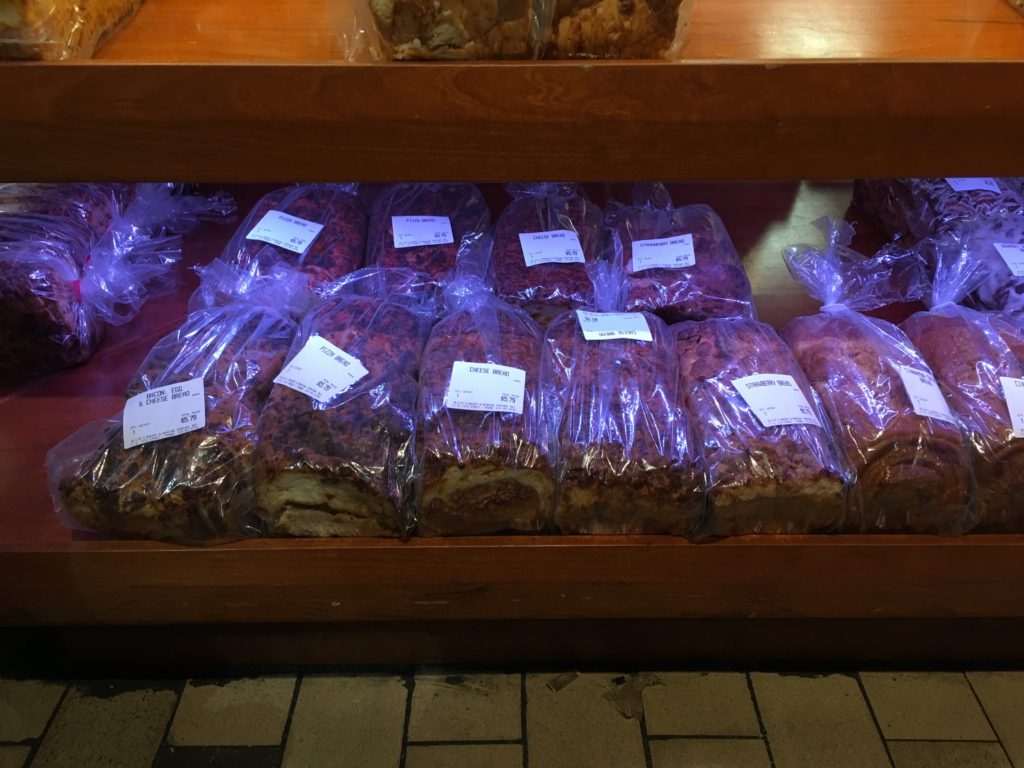 I had a couple of touristy spots that I was interested in, and the first stop was Eastern State Penitentiary, the birthplace of the modern American prison system. Â I don’t always set out looking for depressing spots to visit, but the prison was the #3 Thing To Do on TripAdvisor, which I took as a good sign. There had to be really something there to appeal to most travelers. It turned out to be aÂ fascinating museum.

A little history on the place :

Eastern State Penitentiary broke sharply with the prisons of its day, abandoning corporal punishment and ill treatment. This massive new structure, opened in 1829, became one of the most expensive American buildings of its day and soon the most famous prison in the world. The Penitentiary would not simply punish, but move the criminal toward spiritual reflection and change. The method was a Quaker-inspired system of isolation from other prisoners, with labor. The early system was strict. To prevent distraction, knowledge of the building, and even mild interaction with guards, inmates were hooded whenever they were outside their cells. But the proponents of the system believed strongly that the criminals, exposed, in silence, to thoughts of their behavior and the ugliness of their crimes, would become genuinely penitent. Thus the new word, penitentiary. – Eastern State Penitentiary site

It didn’t hurt that Steve Buscemi was the audio tour narrator. Back in the day he scouted the place for a movie (which didn’t end up happening), and slowly became more involved with the preservation of the building. 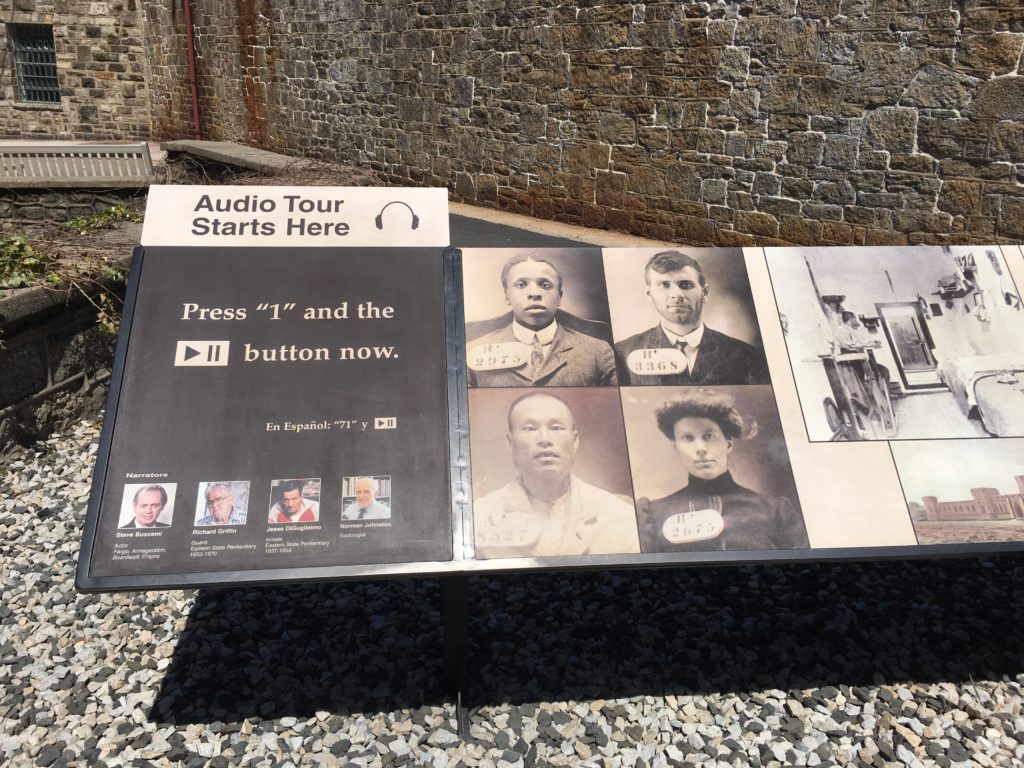 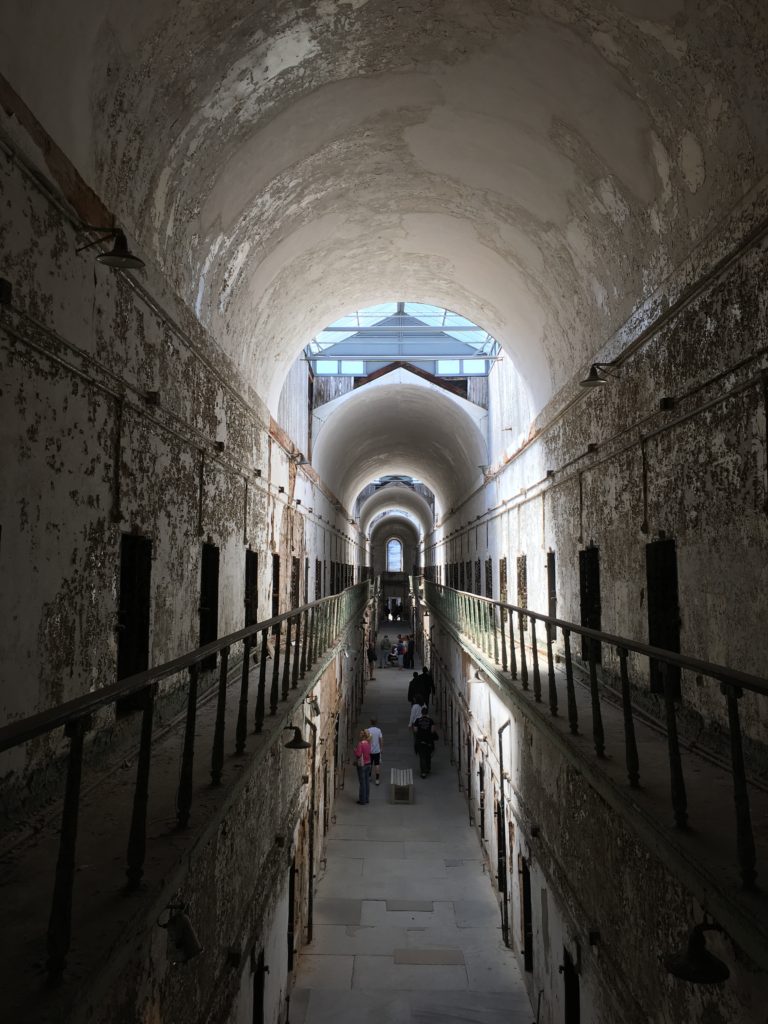 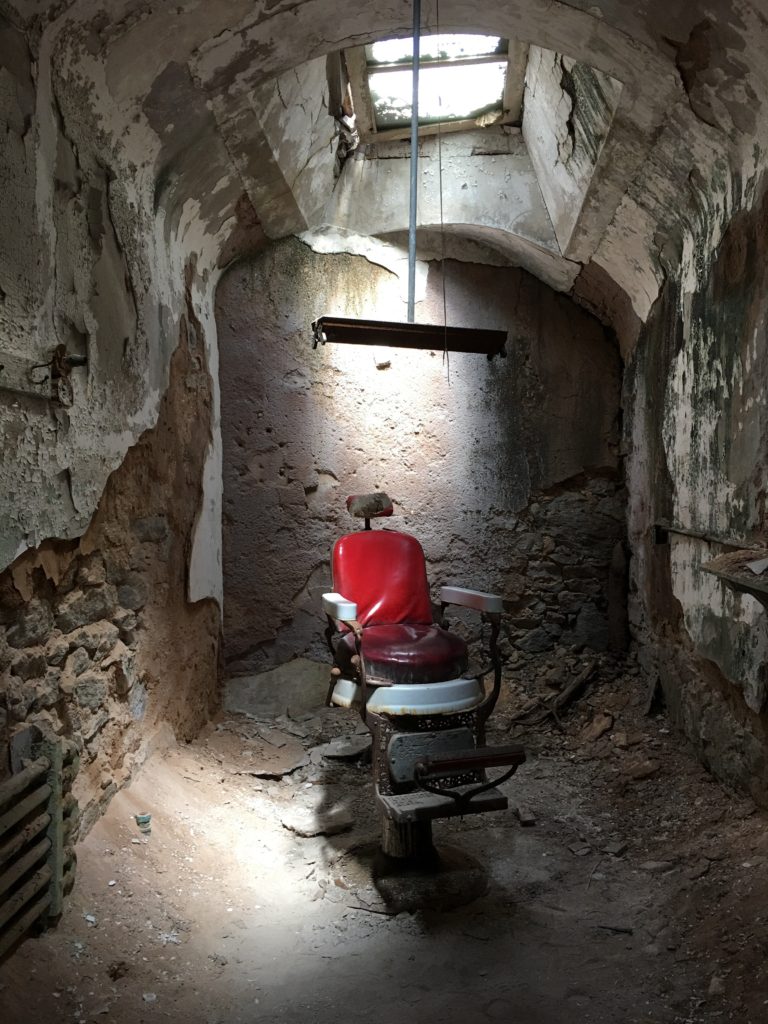 I took a few moreÂ pictures, so if you’re curious to see more, check out my photo album. The prison was a museum for sure, but you were able to touch most things, and there were many modern art exhibits about incarceration speckled throughout the massive grounds. For a future project, they were soliciting visitor confessions of criminal activity. I did my part. 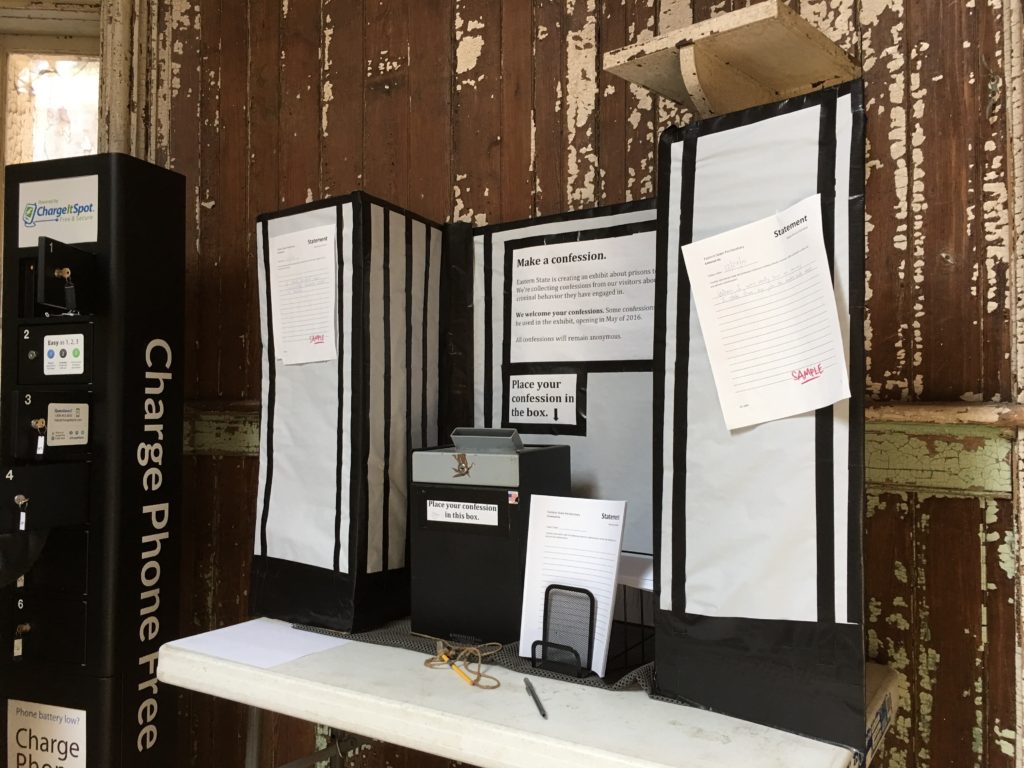 As if that wasn’t enough museum, we went to the Philadelphia Art Museum right after. On the way there we happened upon a live aqua-concert at the Rodin Museum. Men in wetsuits pretended to be birds, then they jumped in the fountain for a jam session on altered instruments. One guy was playing a watering can. Magical.

That night we hit up a Japanese place with Ryan’sÂ familyÂ for a little dinner and karaoke. The family that sings together…

The next day we took a bus out to see Ryan’s dad’s family in Jersey. It was a pretty quick visit and I didn’t think to get any photos but it was really nice seeingÂ them again, and meeting his grandparents.

Other trip odds and ends… 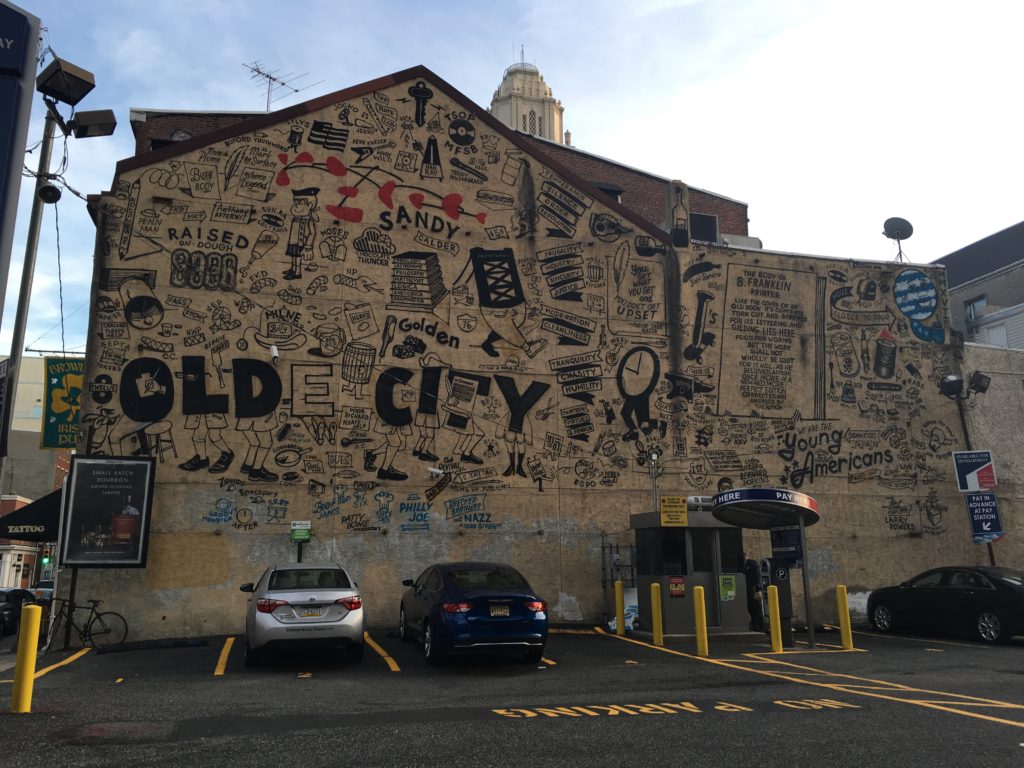 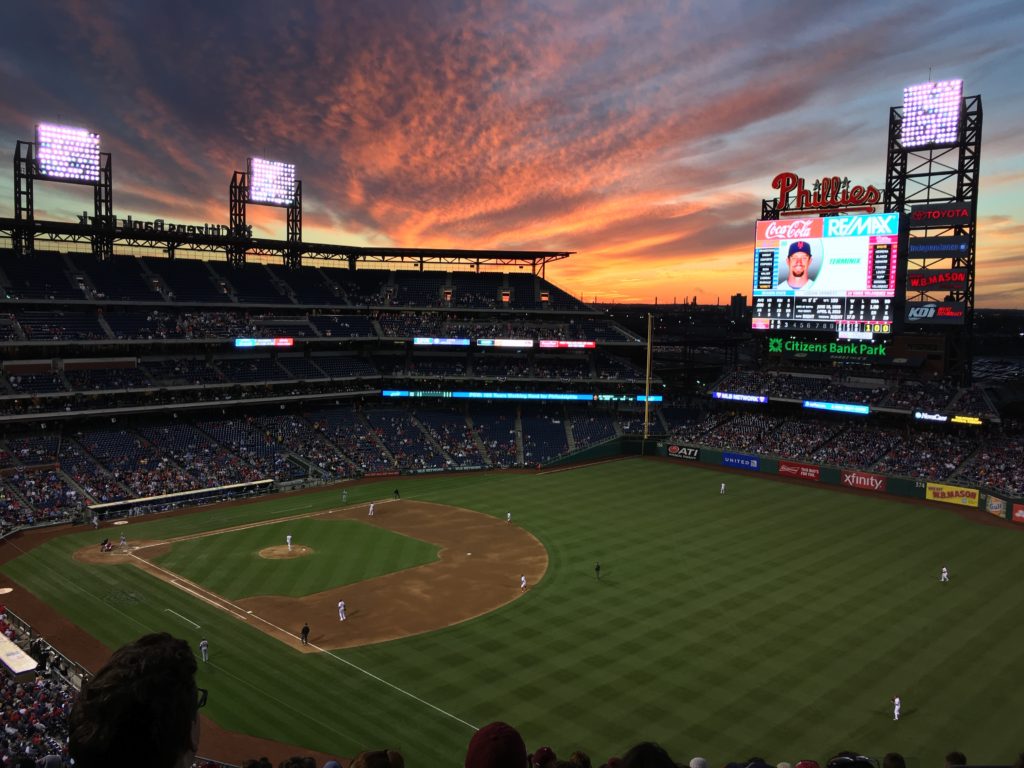 I saved the best museum for last – the Mutter Museum.Â  Not gonna lie, this was the number one thing I wanted to see on this entire trip.Â They had a few exhibits that I dreamed of seeing: the soap lady,Â the livers of Chang and Eng (Siamese twins), and an exploration of medicine during the Civil War… I could go on and on.

The MÃ¼tter Museum is a medical museum located in the Center City area of Philadelphia, Pennsylvania. It contains a collection of medical oddities, anatomical and pathological specimens, wax models, and antique medical equipment. 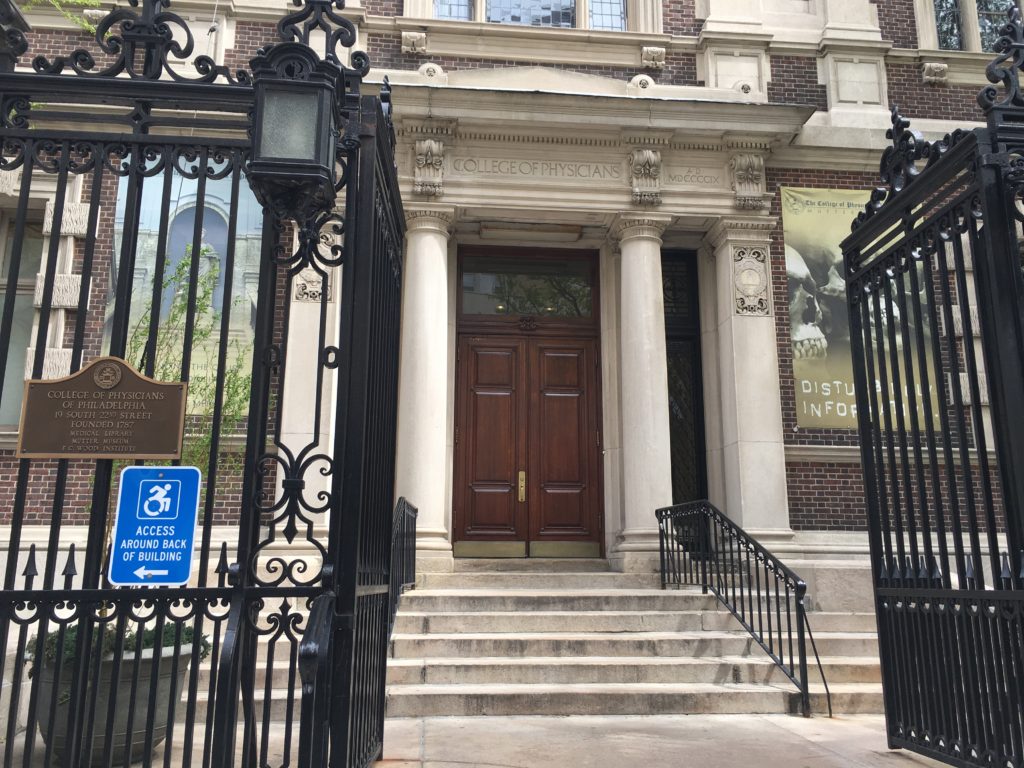 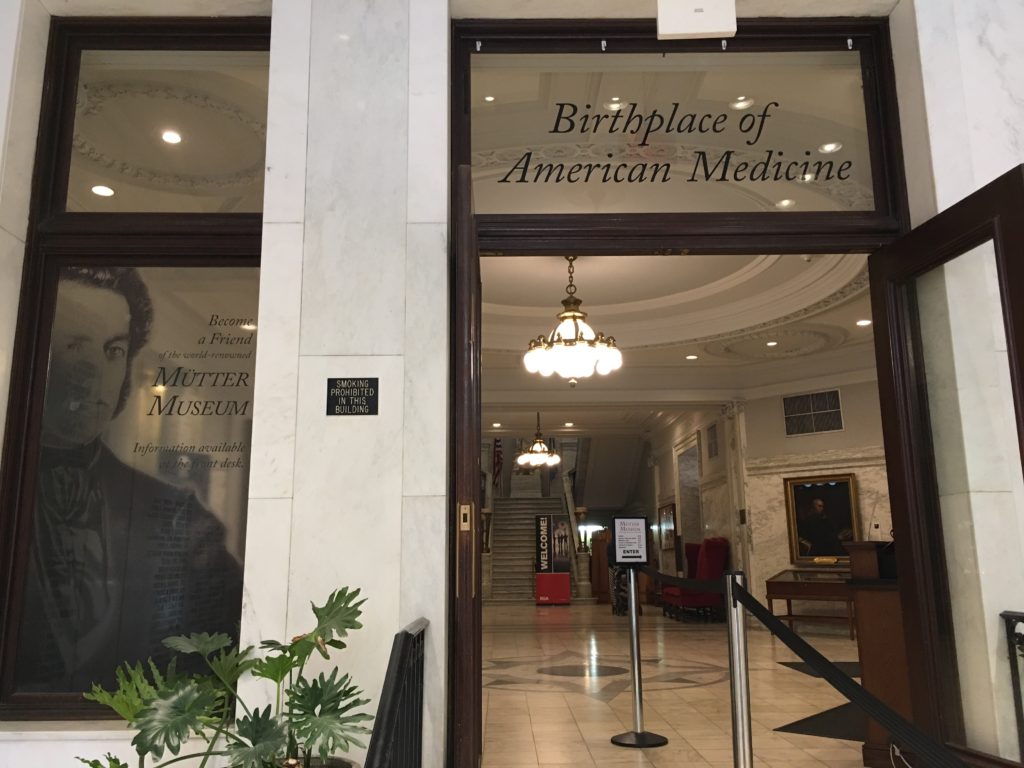 Unfortunately no cameras were allowed inside the museum. You’ll just have to imagine a nine foot colon and lots of deformed specimens in jars. Surprisingly, they book events here, even weddings!!! Learned this the hard way as we accidentally wandered upstairs into a scientific symposium.

And that’s it! Thanks for the chillÂ weekend, Philly. I love you, but you need to eat more vegetables.