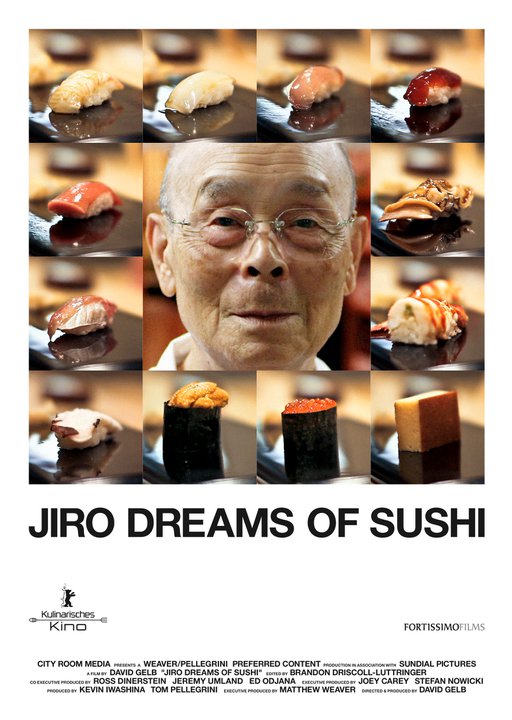 After a few weeks of seeing teasers for this documentary all over the internet, I finally caved and caught a showing. Surprisingly, it was only playing at one theater! Kind of weird for San Francisco, a food-obsessed town.

If you watch the trailer above, you get the idea. The movie is only 80+ minutes long, but drags a little, and is a bit heavy on the slow motion shots and the Philip Glass. Throughout the movie, I was like “Here we go again, I’m gonna see another fish set to classical music.” I love fish, documentaries and Philip Glass very much, so that’s saying a lot.

Still, I was fascinated. The title character is considered by many to be the best sushi chef in the world and runs a tiny and unassuming restaurant located in a subway station. He’s been making sushi for 75+ years. <—SAY WHAT NOW??? Yes, 75 years! Add on top of that, he’s a workaholic and a perfectionist. Any hint at a personal life is minimal, although he has groomed his two sons to take over his legacy, and there are mentions of a vey painful childhood.

I found many similarities between my own family and the family portrayed in the movie. Most notably, my own father was also forced into the restaurant business from a young age due to troubles with an unreliable and alcoholic father. Jiro was told that he could never come back home at the age of 9, which is when he started in sushi. My dad quit school when he was 8 or 9 to start working.

Another thing that I could relate to was the workaholic spirit created by the struggle to survive. Never taking vacations, never not thinking about the restaurant, not having a personal life, living the same day over and over for decades, only closing the restaurant for funerals- Mom, I’m looking at you! I’ve always felt kind of sad about that part of my parents’ life, but this movie presented Jiro’s dedication and single-mindedness as something of a virtue, which is another way to look at it. I suppose if it is all tied to a passion, I can get behind that. I console myself by reminding myself that my mother loves working, and has chosen this path. It’s just her being… her.

Beyond the food bits, I enjoyed the movie as a meditation on work, passion and perfectionism. You’ve gotta admire an 85 (86?) year old at the top of his game, who is still curious and taking risks.

Basically Jiro’s philosophy is whatever your job is, don’t complain. Do your best. Do it over and over and over again.  Do your best everyday. Always look forward to the next thing, dream big and push yourself. There’s always room for improvement, even if you’re the best sushi chef in the world. I left the movie feeling inspired, yet it’s still unlikely that I will one day find one magic path that will keep me captivated for seventy-five years.