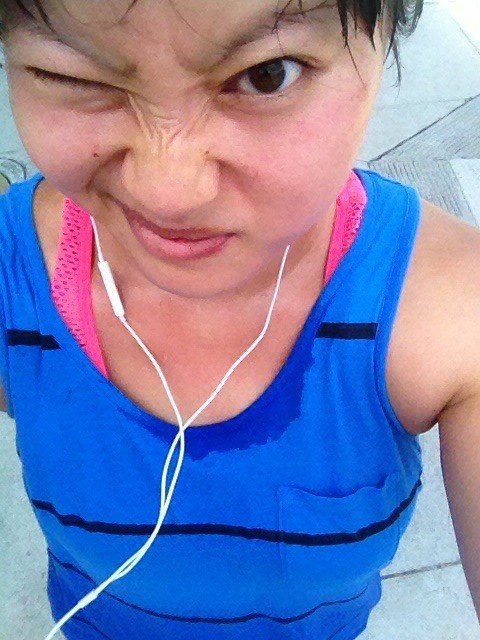 Ever since I got another office job and seriously took up regular running (about a year ago), Iâ€™ve gained 5-10 pounds that will not budge (and no, it’s not muscle. I wish). Running makes you hungry. So hungry. Iâ€™ve tried a number of things over the past year to jump start the weight loss, and my current fitness routine sounds like something that the old me from a year ago would probably have mocked relentlessly.

When I look back at this list, it makes me laugh. Together, it all looks a bit overwhelming and extreme, but it happened bit by bit, and it’s now just a part of my life. My weight has gone up and down throughout this process, but thankfully my fitness level continues to progress. In fact, about a month ago I hit a personal fitness milestone! I ran 7 miles on my weekend long run. And I didn’t even hurt the next day! INCONCEIVABLE! While I’ve run that distance before, that was years ago, and damn it hurt hard the day after. Something about hitting that milestone made me think, hey, maybe I could run a half marathon? And so I signed up for oneÂ to run with my friend Michelle. I cobbled together a personal training plan in Google Calendar, and currently I’m on Week 6 of a 20 Week training plan. I’ve got a couple of goals:

Six weeks in, 3 lbs & 2% bodyfat down and so far no injuries! So far so good. I highly doubt that I’ll be updating much with training news. IÂ just wanted to share what I’ve been up to lately.

Also, I don’t know how those fitness Instagrammers look all hot when they take workout selfies, but this is what I look like. Red faced, angry, drenched in sweat and my eyes are burning from melting sunscreen in my eyes! Why do I like running again?

WELL. Here we are at DAY THIRTY. The end of my vegan thing, and another 2 wks to go on the sugar program. I almost updated on Day 20, but honestly it was so boring. Here’s what I had:

30 Day Vegan: Eating at home has been totally fine as I’ve gotten my ass into the kitchen and have made a few staples to get me through the week. I’ve been living on the following: portobello mushroom fajitas, oatmeal, salads, falafels and lentils. I know, it’s not very exciting, but not having to think too much has been a nice change of pace. The only real disappointment is the fact that Â finding vegan brunch in San Francisco is a pain. Even at classy joints like NOPA, there was nothing to be Â had which would pass for vegan. So I cobbled together a few side dishes and called it a day.

I Quit Sugar: Getting there. Taking my coffee black. Eating a whole lot of avocado to keep the cravings at bay.Â Had a blueberry the other day and it tasted like a lightning bolt in my mouth. Whoa!

30 Day Vegan:Â Well, that was a fun experiment. Is it disappointing to say that going vegan was not that interesting? I got into a rhythm and then there wasn’t much to it besides cruising through it on autopilot with my favorite veggie dishes. Restaurants were the only real temptation. Tomorrow I’m celebrating the end with a real brunch (EGGS) and maybe a nice meal.

I Quit Sugar: Still trying on this one, and doing just ok. It is really really hard avoiding fruit. I have about two more weeks on the IQS plan.

Side effects: Hormonal acne is back.>:l Even vegetables taste sweet to me. Lost a few pounds from going vegan, but nothing all that startling.

Final Thoughts on the Vegan Thing

The experiment was another reminder that you don’t know what you’ve got till it’s gone. Vegan cheese in all of its forms (cashew cheese, Daiya) were crap (even after I ordered San Francisco’s “best” vegan pizza from Patxi’s), and tofu isn’t much of a replacement for eggs. I missed those terribly. Everything else I didn’t think about much. I made it through fine without dreaming of fried chicken, for example. Based on my cravings, I think that I can cut back generally on my overall meat consumption. It’s good to know that you can do without.