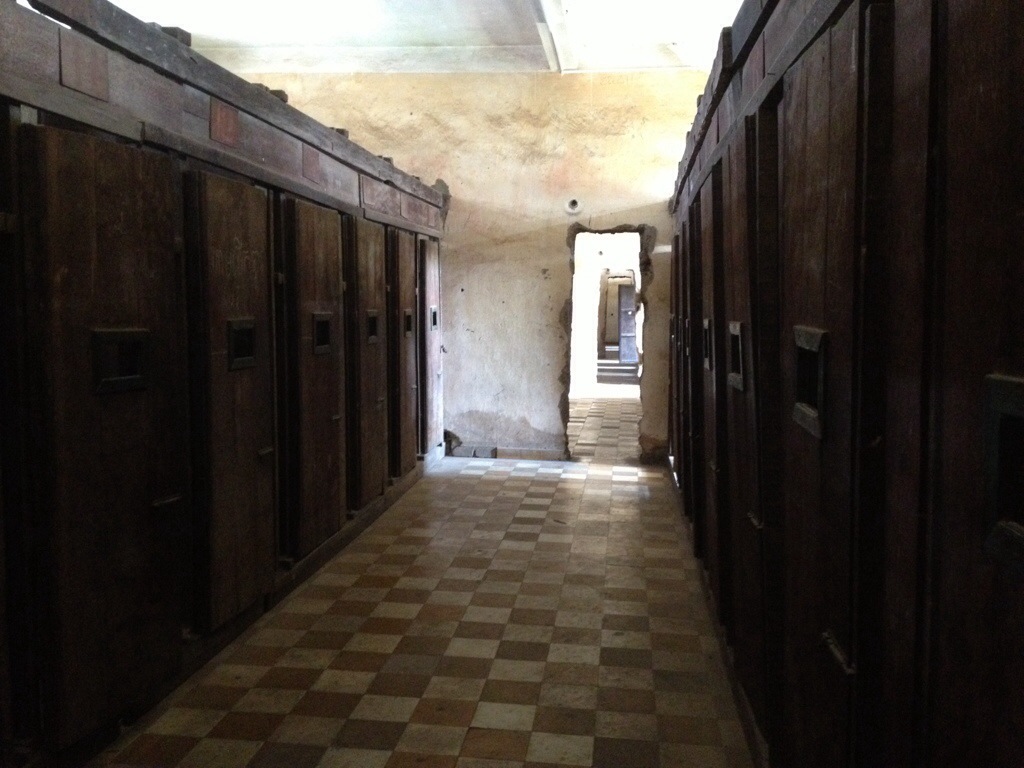 Â IÂ can’t believe I’ve been back 2 months already. Really need to wrap up these travel posts from my trip to Asia. Only one more after this!

After ascending to the heavens at the temples in Siem Reap, it is incredibly sobering to visit Phnom Penh. Most of the tourism focuses around the pain of the past, which is incredibly haunting and way too real. You’ll be walking to get dinner, and tuk tuk drivers would call out to you “Hey, want to go to the Killing Fields?”

After yet another 6 hour bus ride (pretty cush!) we made it to PP. We unloaded our bags at the fabulous Tea House Hotel and made a beeline for the Foreign Correspondents Club (FCC). It’s my favorite spot in the city, and they have a decent happy hour.

To the right of the photo where all the motos are gathered the street is blocked off for protests. A week earlier there were election protests where a man died and several people were injured. Tensions were high, but that night nothing happened.

Life is on the streets… 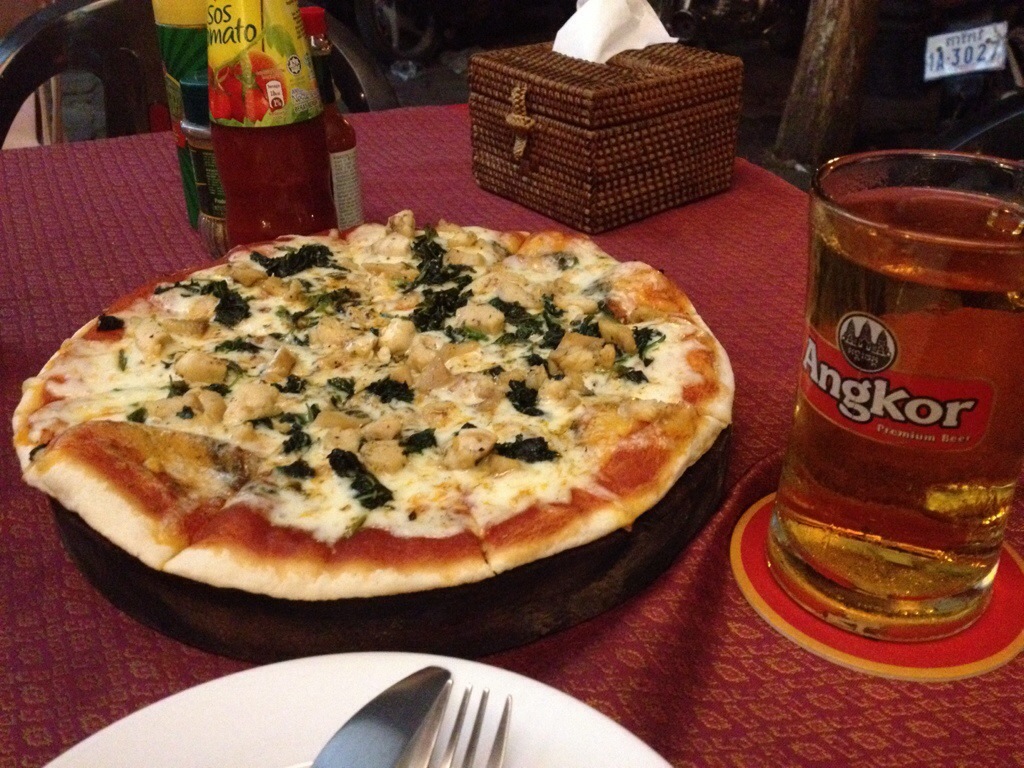 My new BFF. It was a rather long night after this. We kept trying to go to the dance clubs in the area, but we were way too early (9pm? sigh). So finally we called it a night and went back to the hotel. 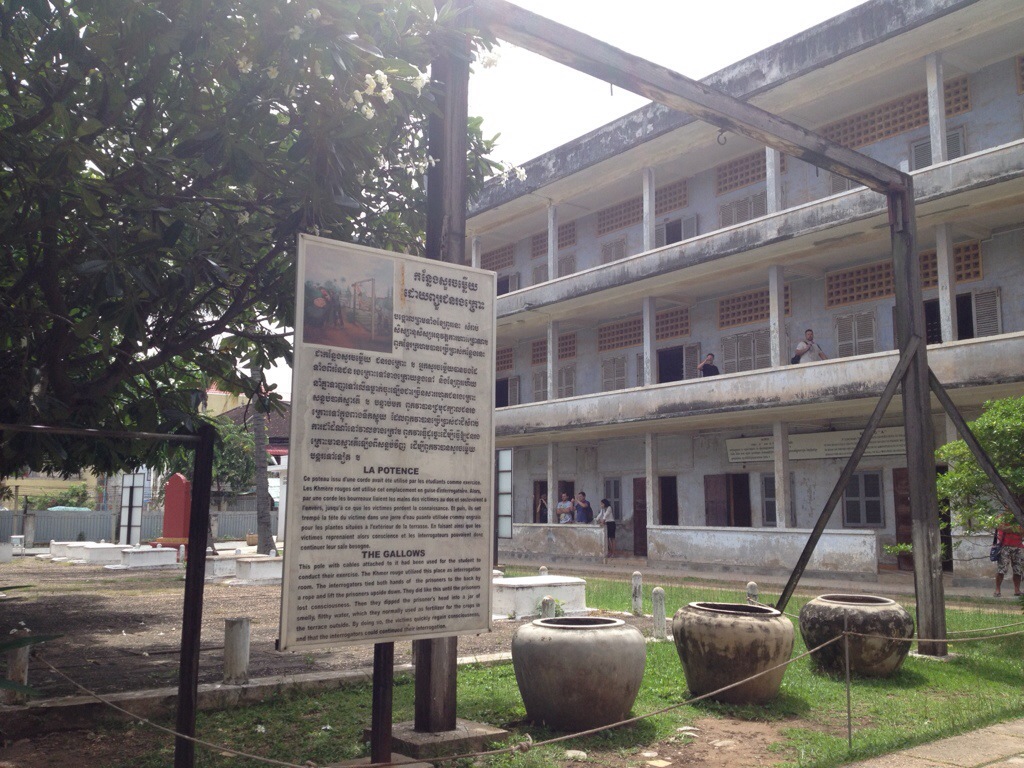 The next day was going to be hard, but we had to do it. We first went to S21, then Choeung Ek (The Killing Fields). This was my second time visiting both spots, and it was still very moving. I have much better photos from the first time that I visited, but it was too hard and too sad to sift through them looking for the “right” ones. It’s probably why I never wrote about PP when I visited before. So, here are a few of the limited photos from my last trip. Disturbing images ahead.

S21 is a school that was converted into a prison during the time of the Khmer Rouge. Men, women and children were kept here before they were taken to the Killing Fields. Above is a gymnastics structure that was used to torture people during interrogations. Basically you’d string someone up and then dunk their heads in water below, over and over until they passed out.

One of many rows of prison cells. There were wooden cells and brick cells (differing security levels)

At the Killing Fields, a taxi ride away outside of the city…

The site was leased to the Â Japanese, and as a result, the information provided is very comprehensive, with audio tours in multiple languages. The Killing Fields was only one of many scattered across the country. Ultimately Pol Pot’s genocide killed off Â 25% of Cambodia’s population. Unbelievable. 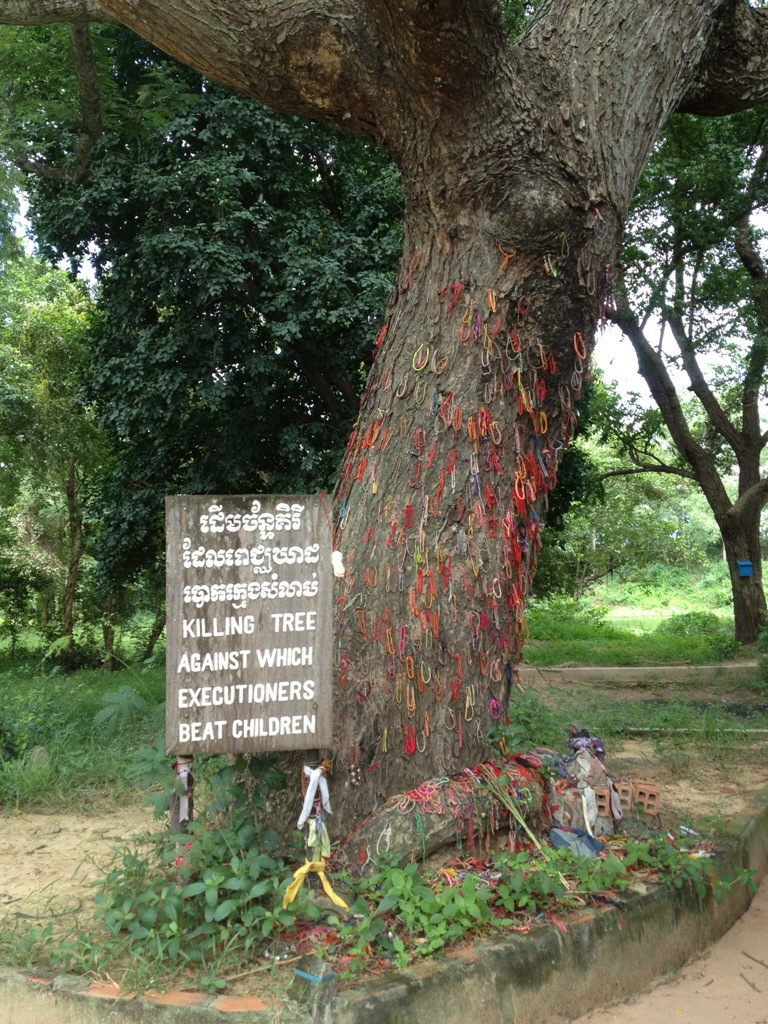 So incredibly sad. When the site was taken over, people did not understand what the tree was until they found bits of bone and brain mashed into the tree. 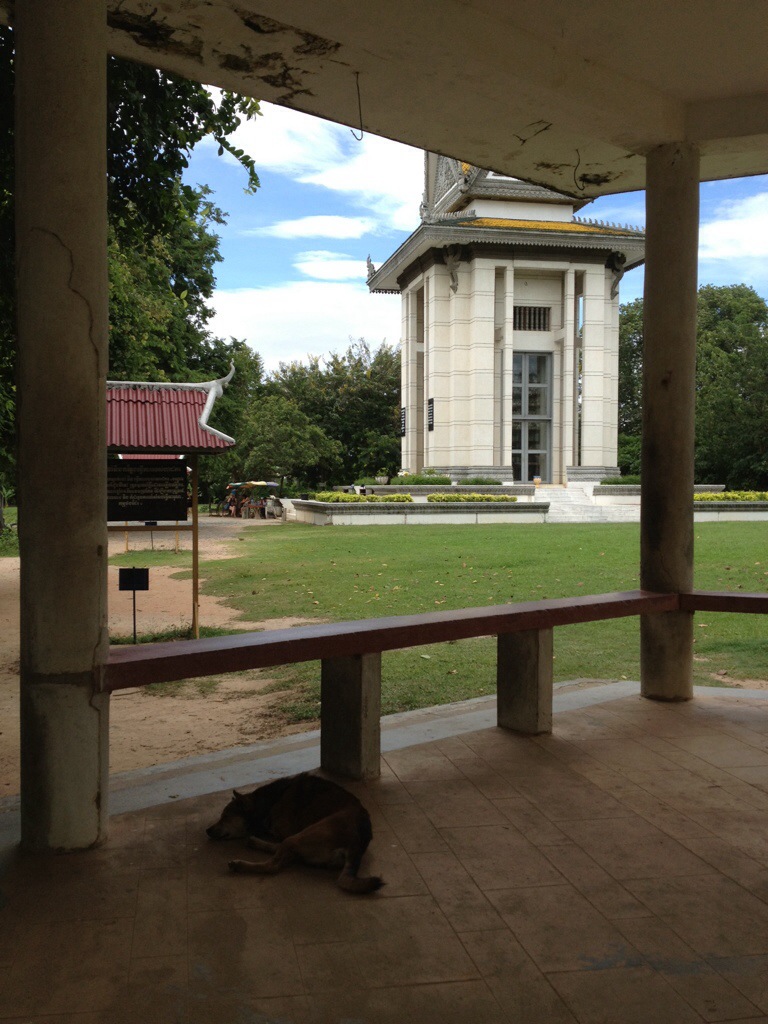 A dog sleeps peacefully with the Memorial Stupa in the background. 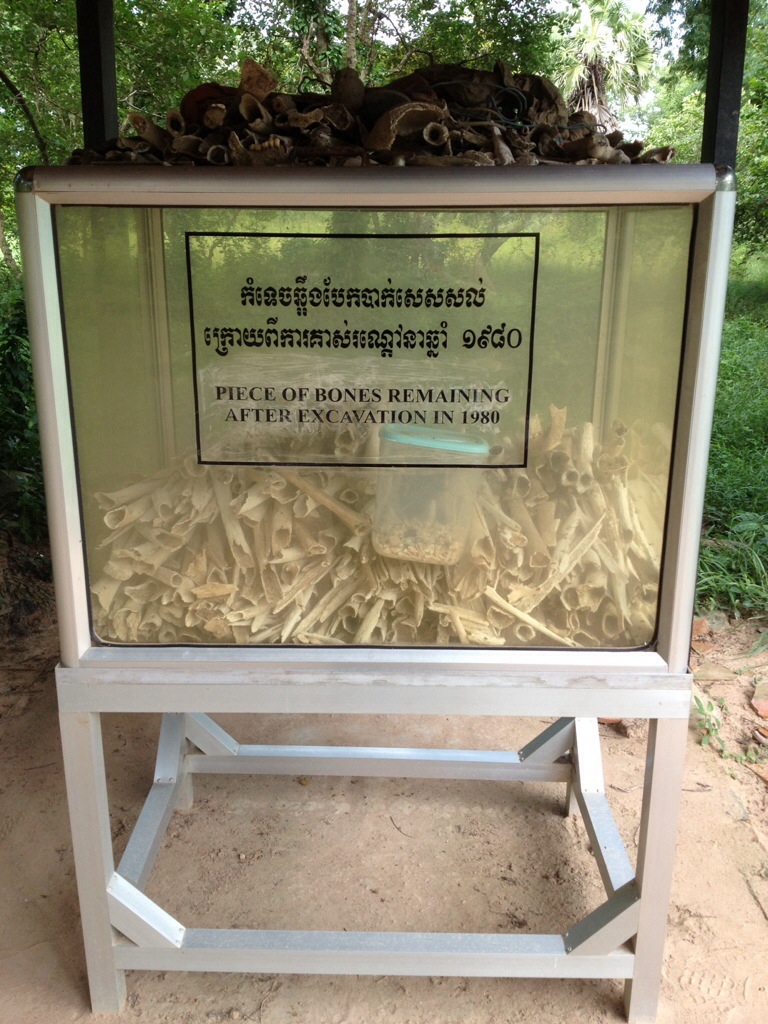 New bones still wash up with the monsoon rains. 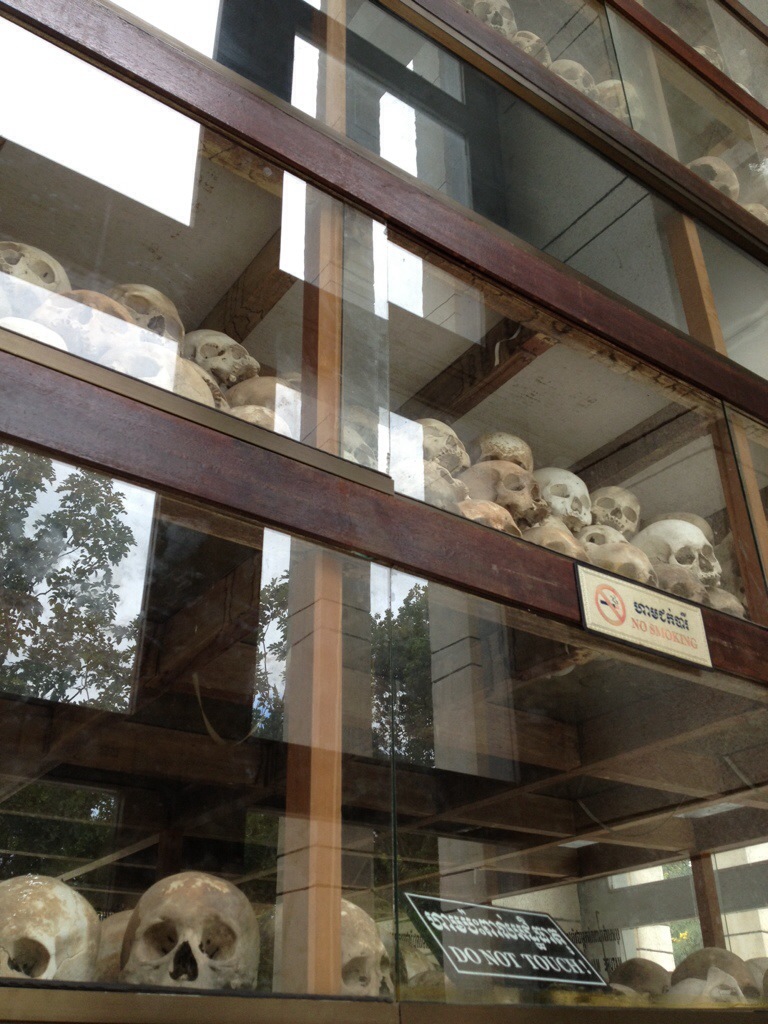 The Memorial Stupa is full of skulls of the victims. Piled high, multiple stories. You see it, but it’s still hard to comprehend. 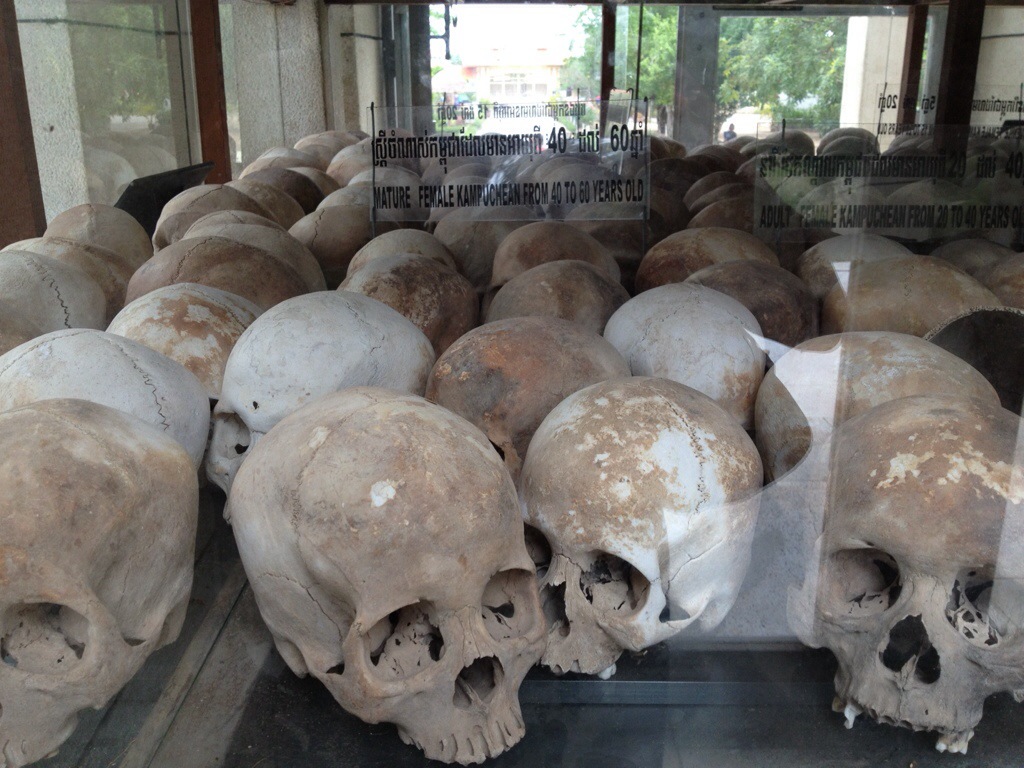 There is more that I could show, such as the Magic TreeÂ Â or the official government photos of the thousands of people killed, but the skulls say it all. It was a very dark and sad time in Cambodia’s history. The resilience of the Cambodian people blows me away. It’s a very special place, Cambodia.

For more information on the genocide, the Enemies of the People documentary is really amazing, and happens to be available on YouTube. 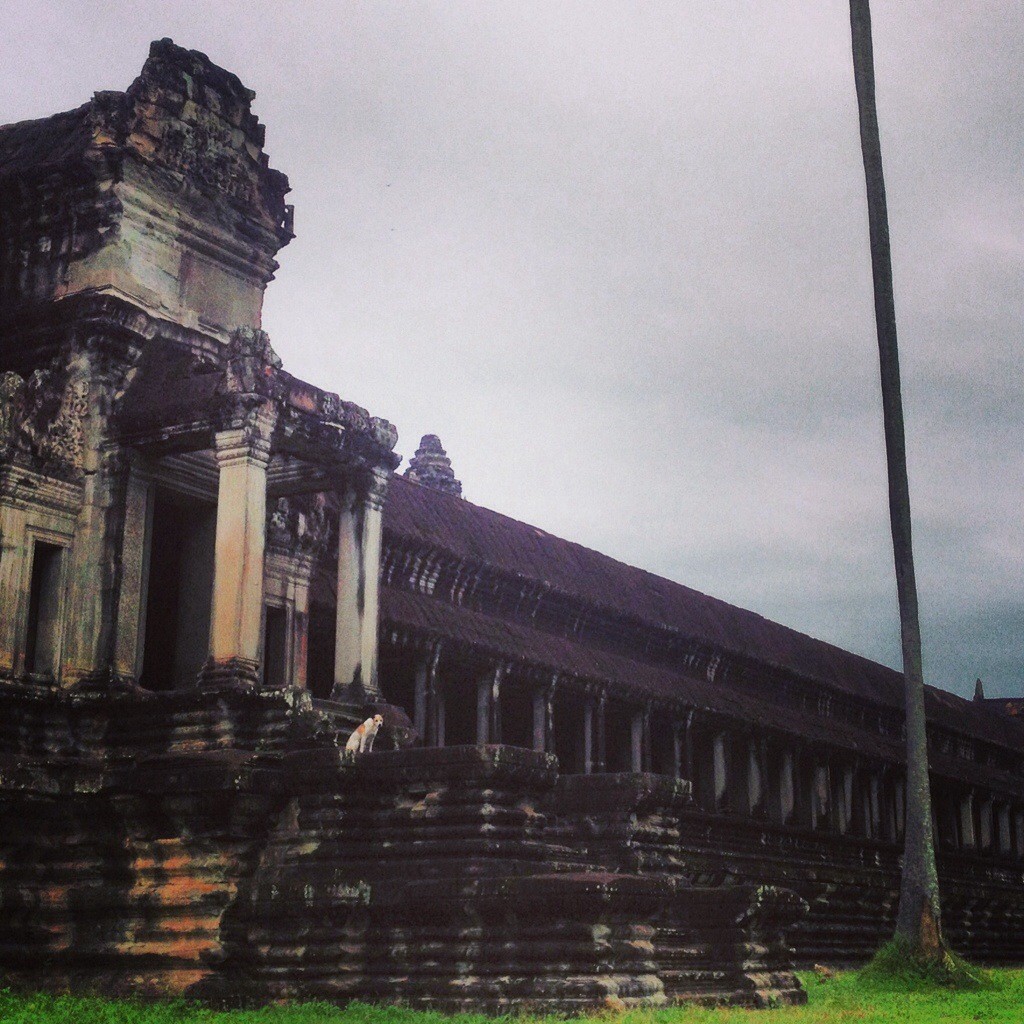 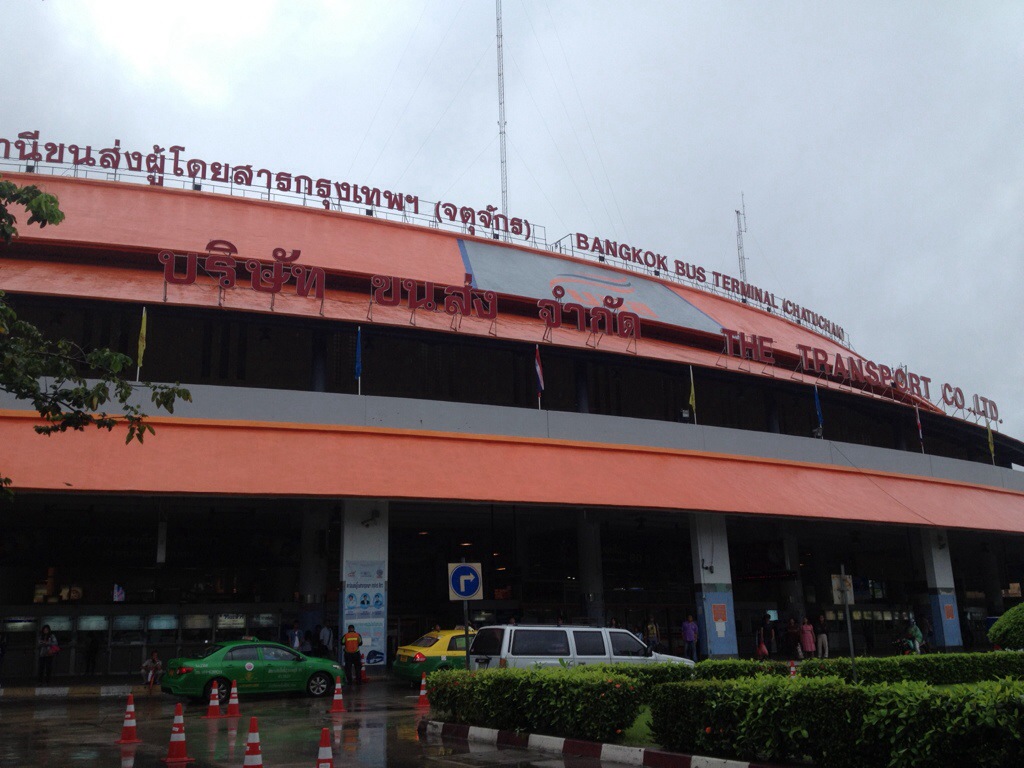 Getting to Cambodia overland from Bangkok used to be a pain, but now there’s a daily government bus that Â is fast and scam free (ish)! In fact getting to the bus station in Bangkok was worse than the bus ride to Siem Reap. It took like flagging down 10 taxis in the rain just to make it the “final mile” from the metro to the bus station. 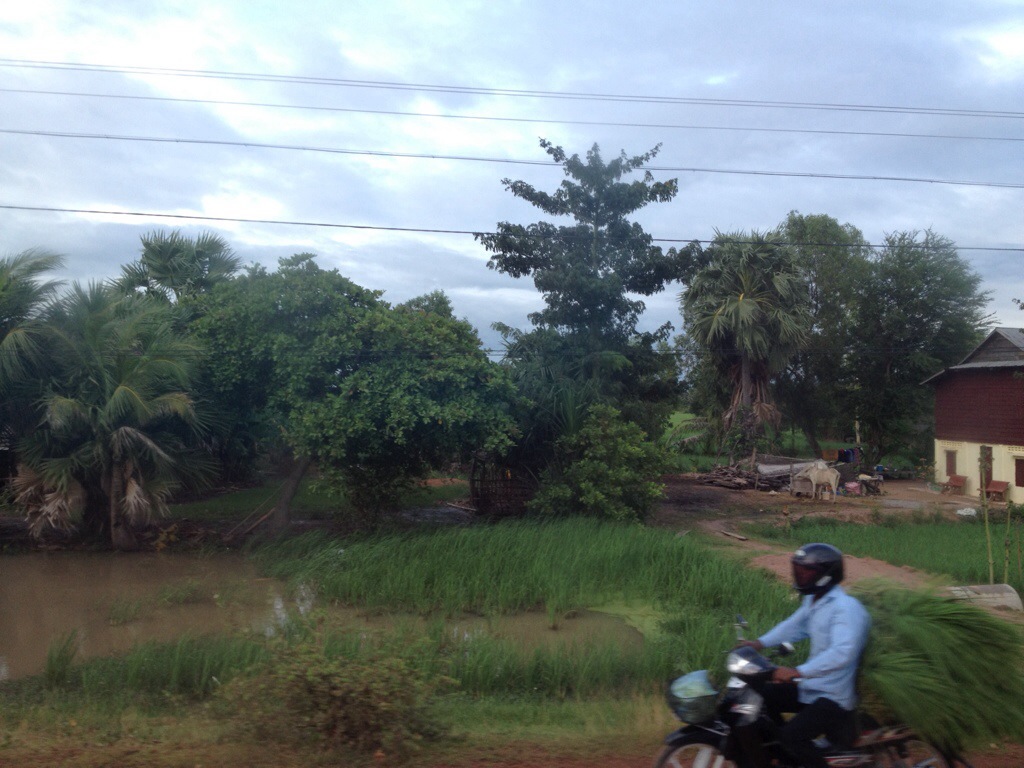 It was a 6 hour ride through the rainy countryside. Lovely.

Siem Reap is a bit of a tourist’s town. Everything is built around the magnificent Temples of Angkor. Â We celebrated our arrival by eating Cambodian BBQ (beef, frog, crocodile, shrimp and snake) and having cocktails at my favorite bar in Siem Reap- Ms. Wong’s, a 1920s Shanghai cocktail bar. 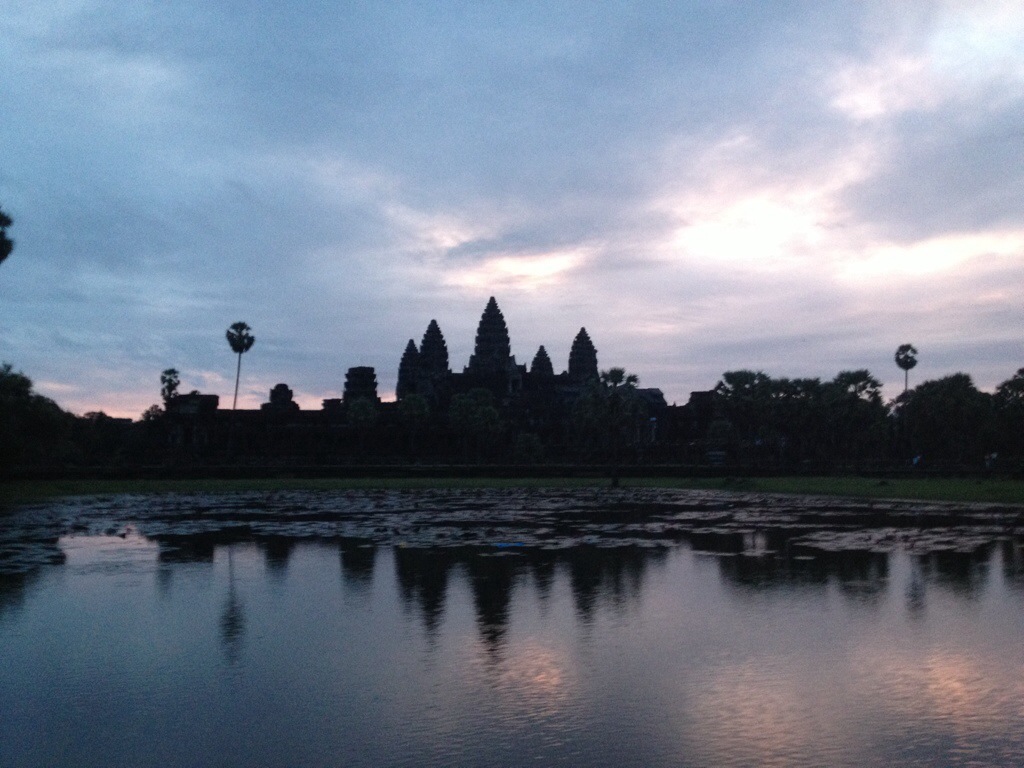 The next day we were up at 5am to catch sunrise at Angkor Wat.

Traveling around the temples via tuk-tuk.

Another view of Angkor Wat. Woof. 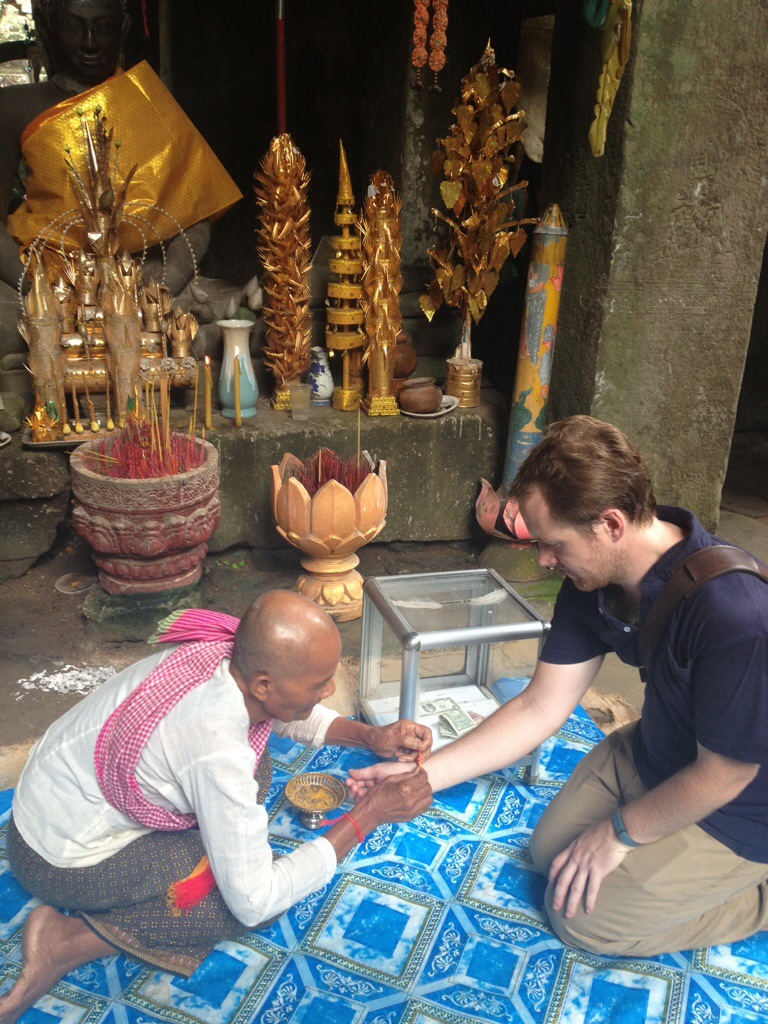 Our hotel was right by a crocodile farm. 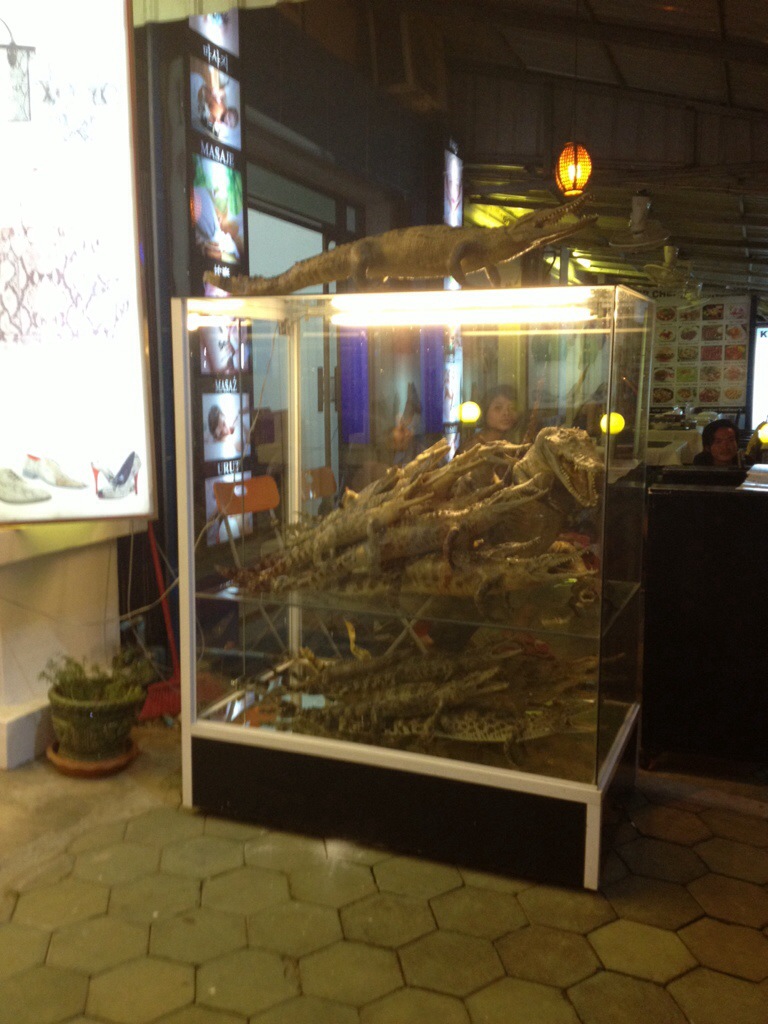 The skin is for handbags and shoes, but they also sell stuffed babies as souvenirs. I was sorely tempted to start my taxidermy collection, but these are so freaky. 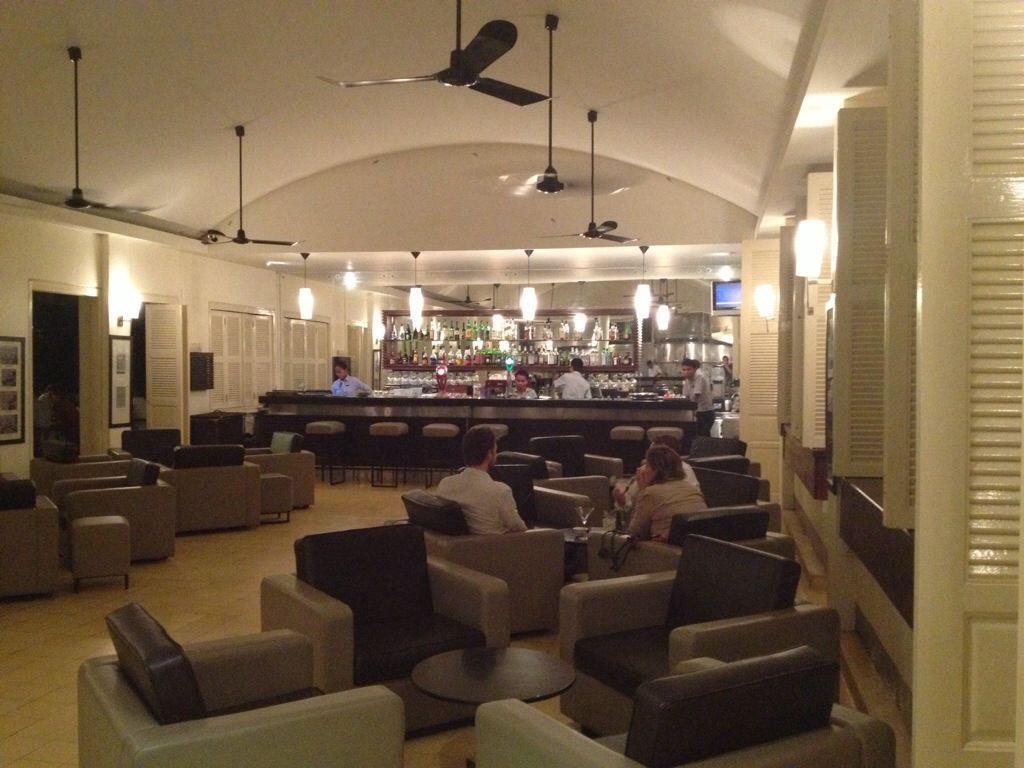 The plush and pricey Siem Reap outpost of the Foreign Correspondents Club (FCC). It was early…

Our bartender at Ms. Wong’s suggested that we go dancing Â at Hip Hop Discotheque, where all the locals dance. 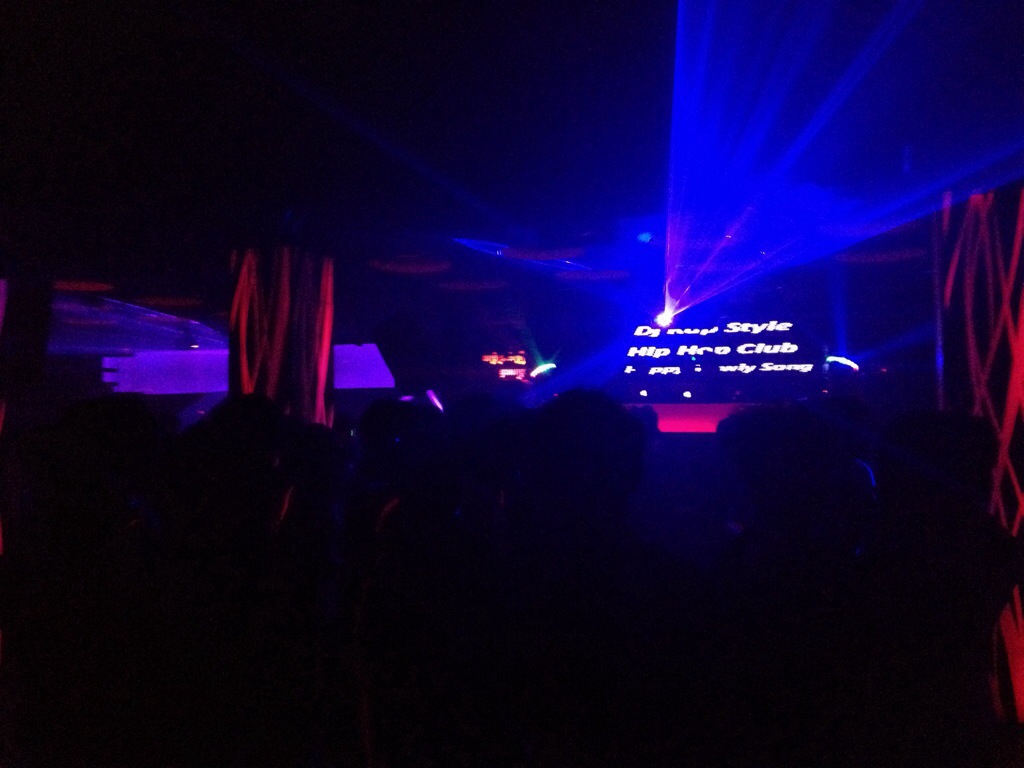 Loved the place, although we drew a lot of attention. Not for being foreigners, but for our American style dancing :). Â They don’t have twerking in Siem Reap. It’s more like a one two shuffle, with a lot of arm action.Â One drunk local even videotaped me dancing on his phone! CRRREEPAY.

One badge of the weary Southeast Asian traveller is the armful of handmade bracelets. Along the way I’ve picked up a few, from friends and little girls, and monks and saleswomen. In Cambodia I received two red string bracelets. One from Angkor Wat, where part of the ceremony was a mesmerizing (hypnotizing?) chanted blessing.

The other was a flimsier bracelet which I received in the Killing Cave in Battambang (which I guess I still need to write about…), while surrounded by hundreds of skulls. It’s been four months since the monk tied the red string around my wrist. Â I was told that I had to wear it until it fell off naturally. Today at the gym it got caught on the elliptical and snapped off. 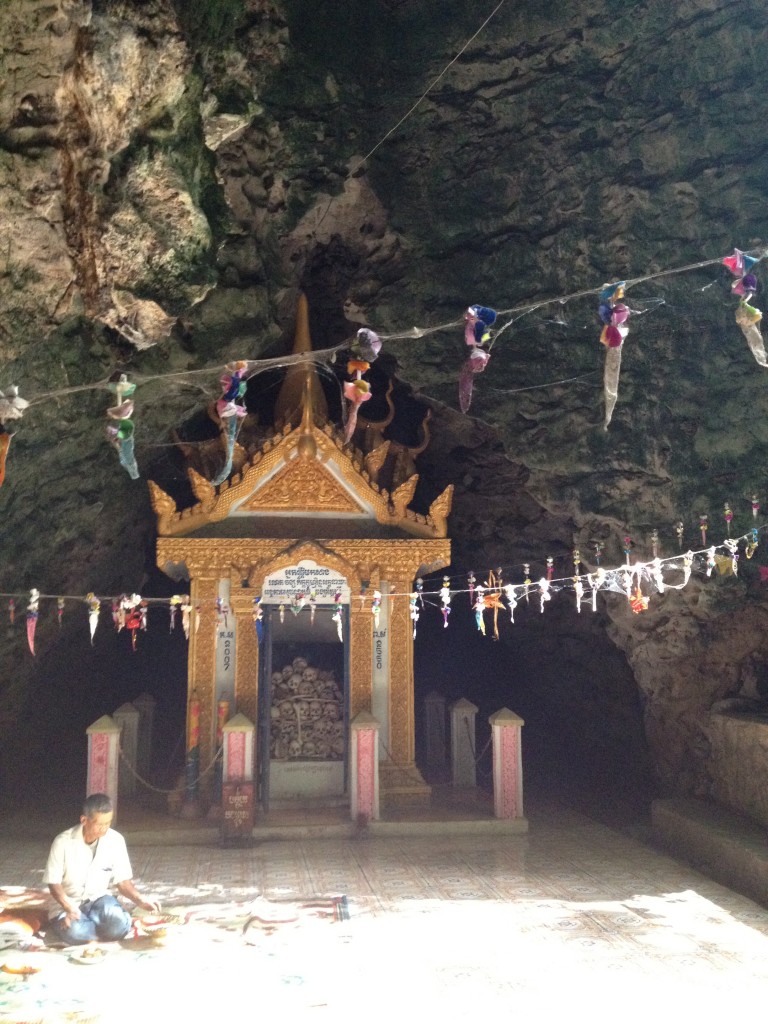 The timing could not be more perfect. Good luck is on its way… 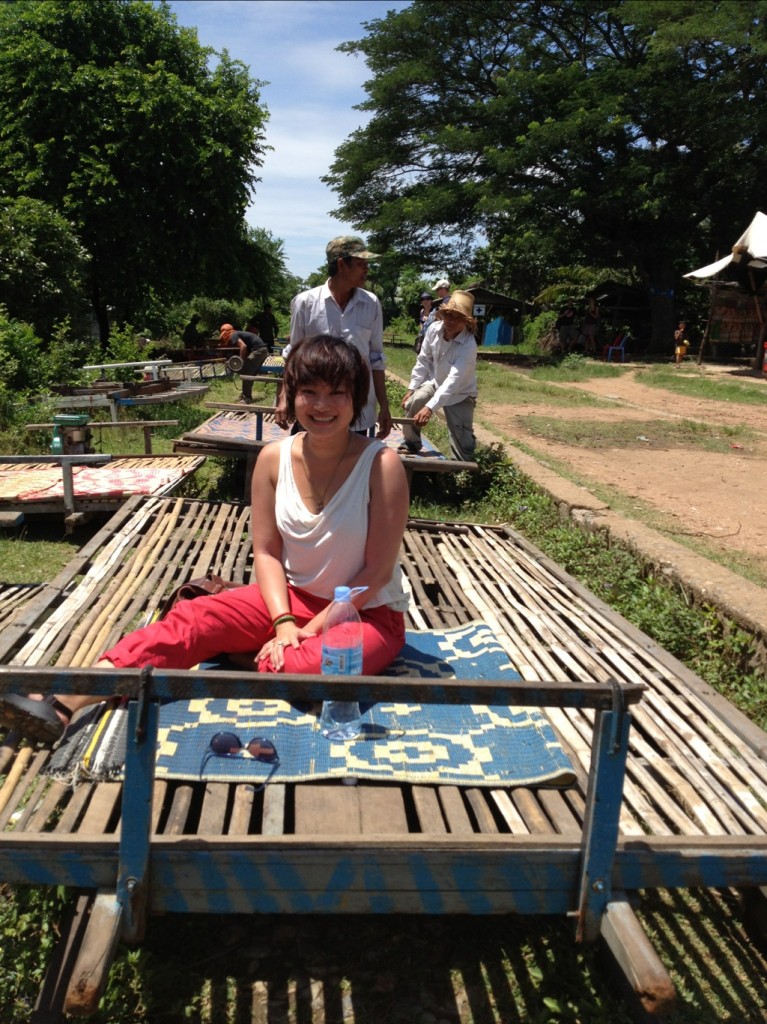 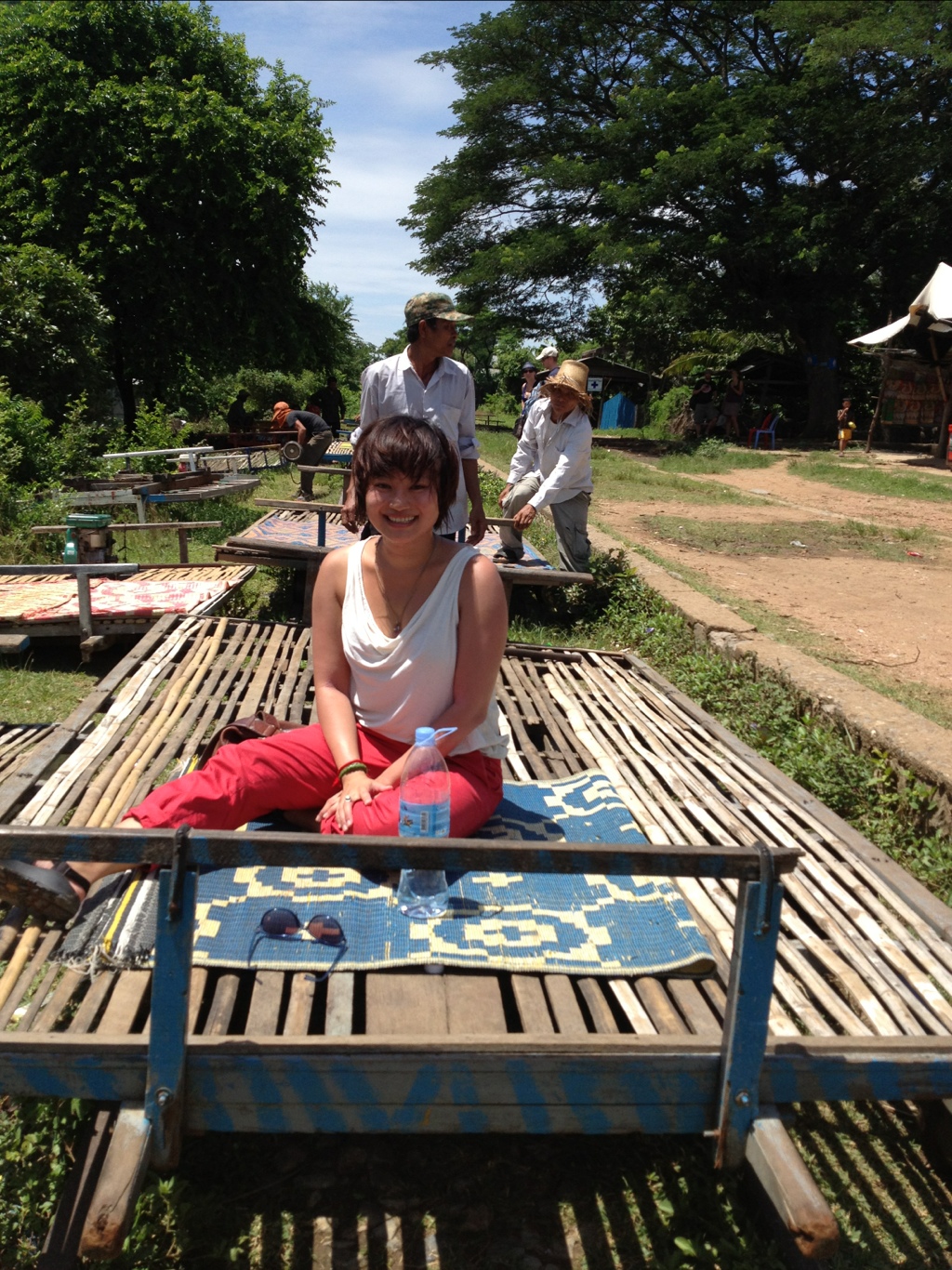 File this one under “Didn’t know this existed, but a MUST DO if in Battambang, Cambodia”

Battambang, Cambodia is the second most populous city in Cambodia behind well known frontrunner Phnom Penh. It lies about halfway between Phnom Penh and Bangkok, making it an obvious choice for a stopover.

It was in the fabulous 1920s Shanghai themed cocktail bar Miss WongÂ Â where I first heard about how lovely Battambang was (a popular vacation spot for locals looking for a romantic getaway) and about the curious “bamboo train.”

Well I also heard about the bamboo train from my driver, and to be honest the history is a bit fuzzy. The best I can gather is that there was originally a train linking Battambang with Phnom Penh, and that the train went out of commission due to destruction, either from the Khmer Rouge, or who knows what. Parts of the track are still intact, however, so the locals hooked up a bamboo pallet with a lawnmower engine, and ta-da! Bamboo train! You pay $10 per train, hop onto a flimsy bit of bamboo and go whizzing across the countryside. It’s exhilarating.

It seems to be mostly for tourists, although I did encounter a group of locals moving moving their motos and tons of food. 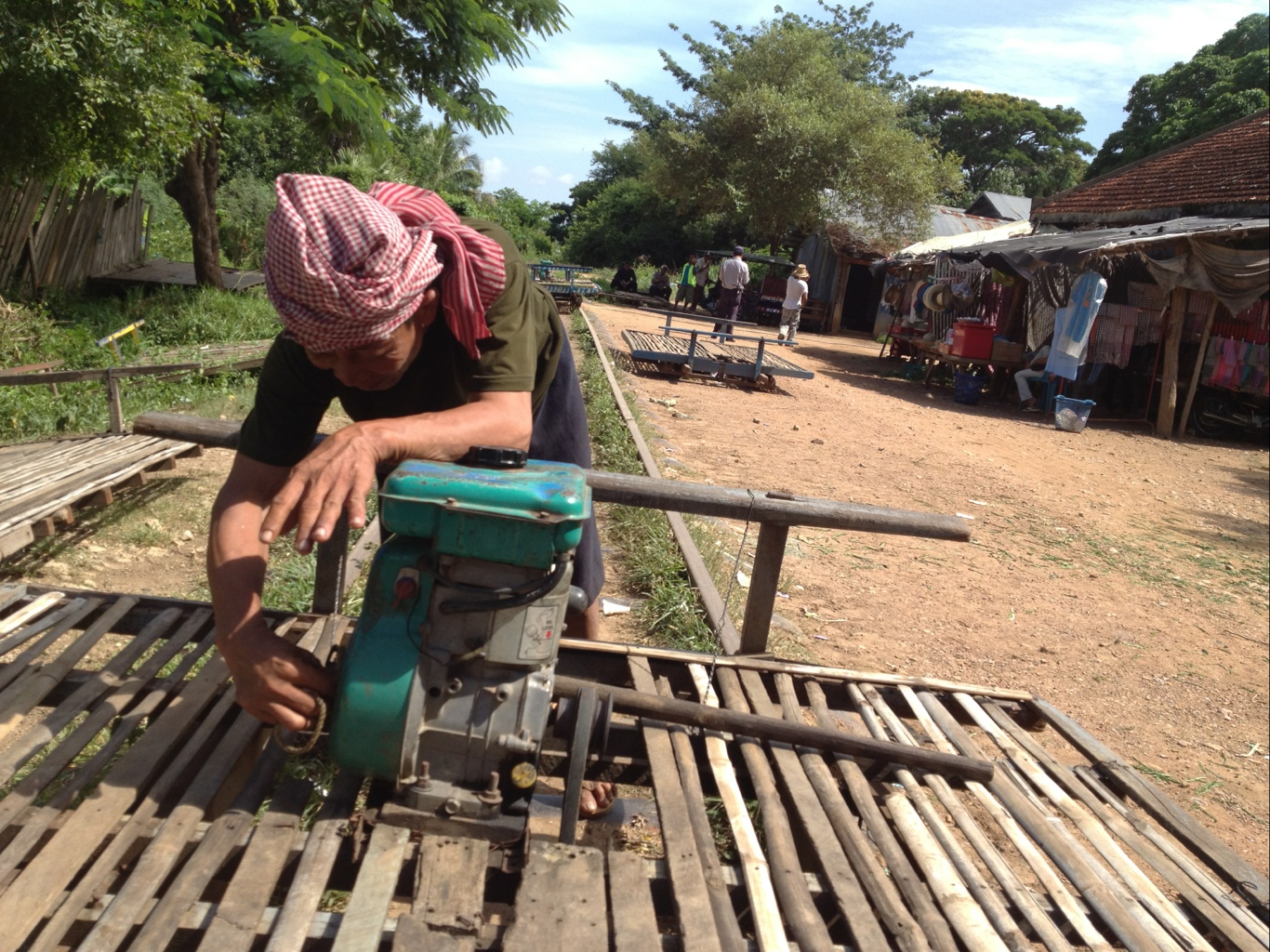 My driver revving up the engine. 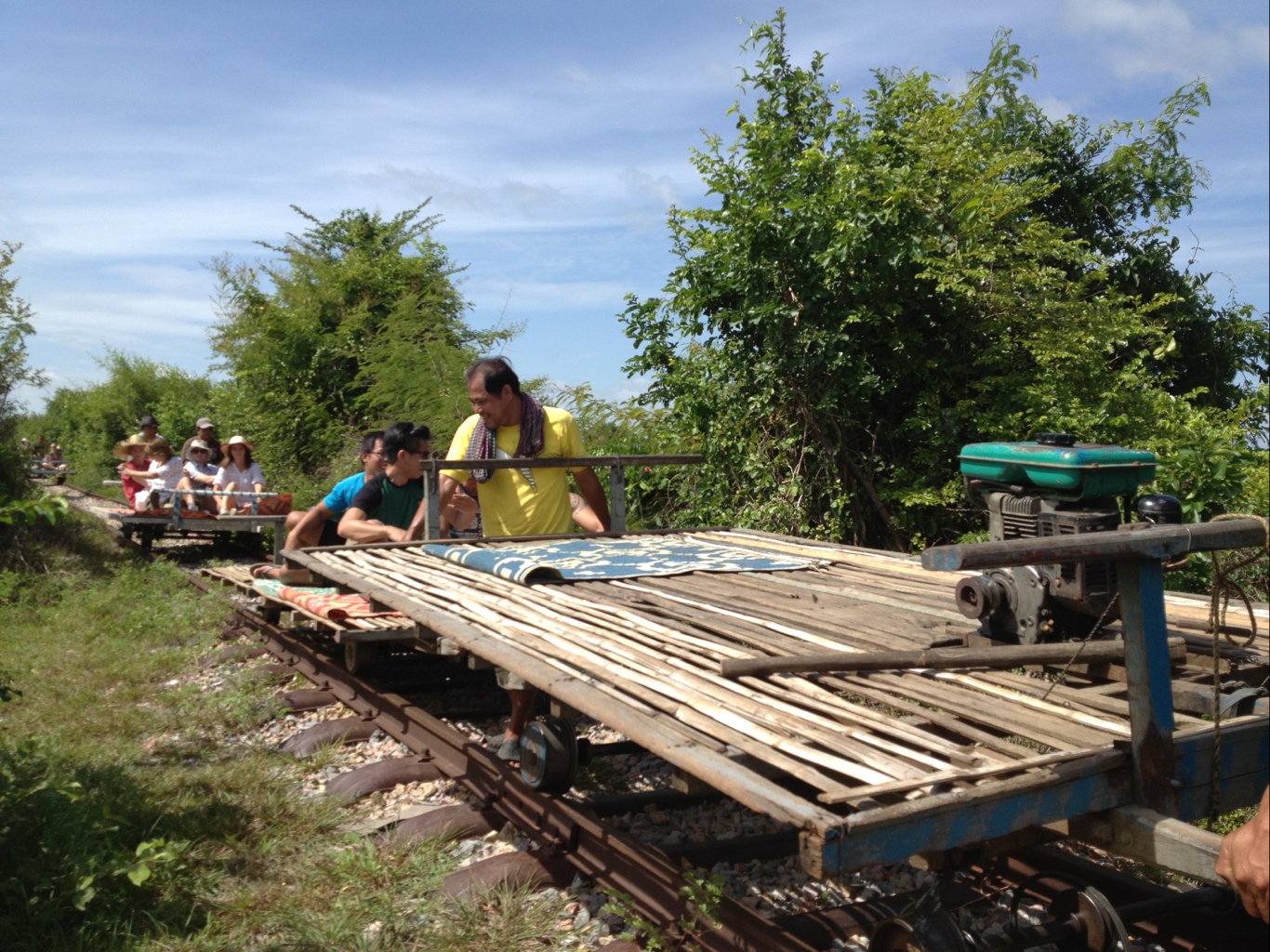 There’s only one track, so every time two bamboo trains meet, somebody’s gotta get off. They dismantle the entire thing, the people pass, then the crew sets up the train again. This happened to me about five times on my trip!

Here’s video I took on my phone when I thought we were going to run over some locals: 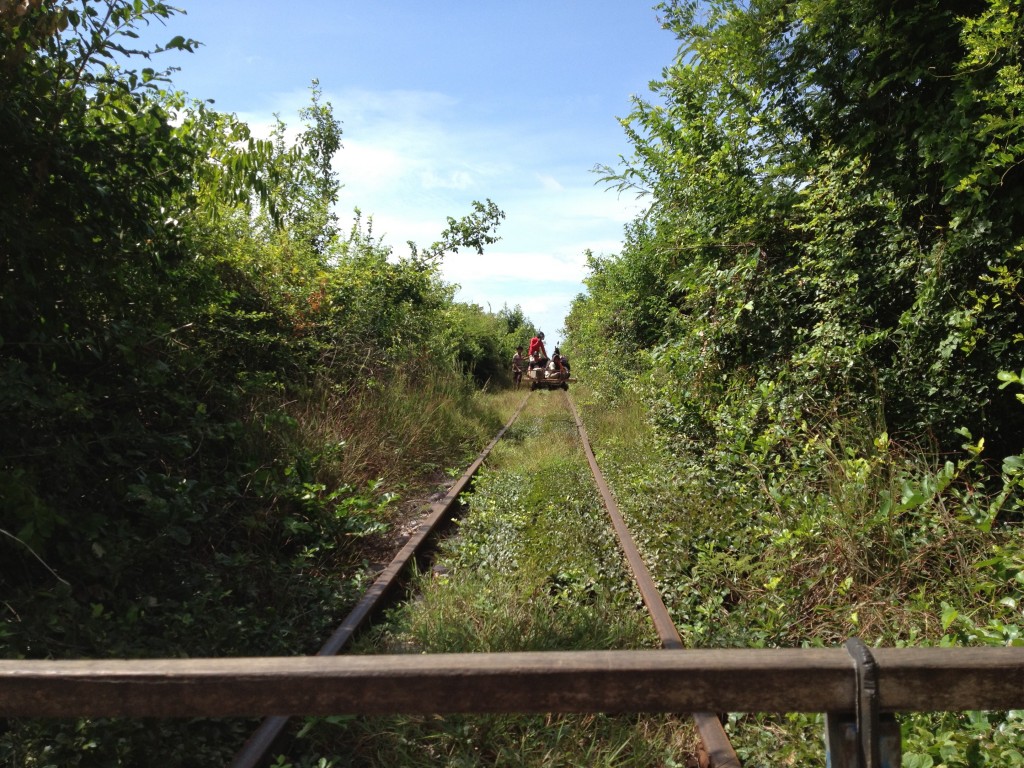 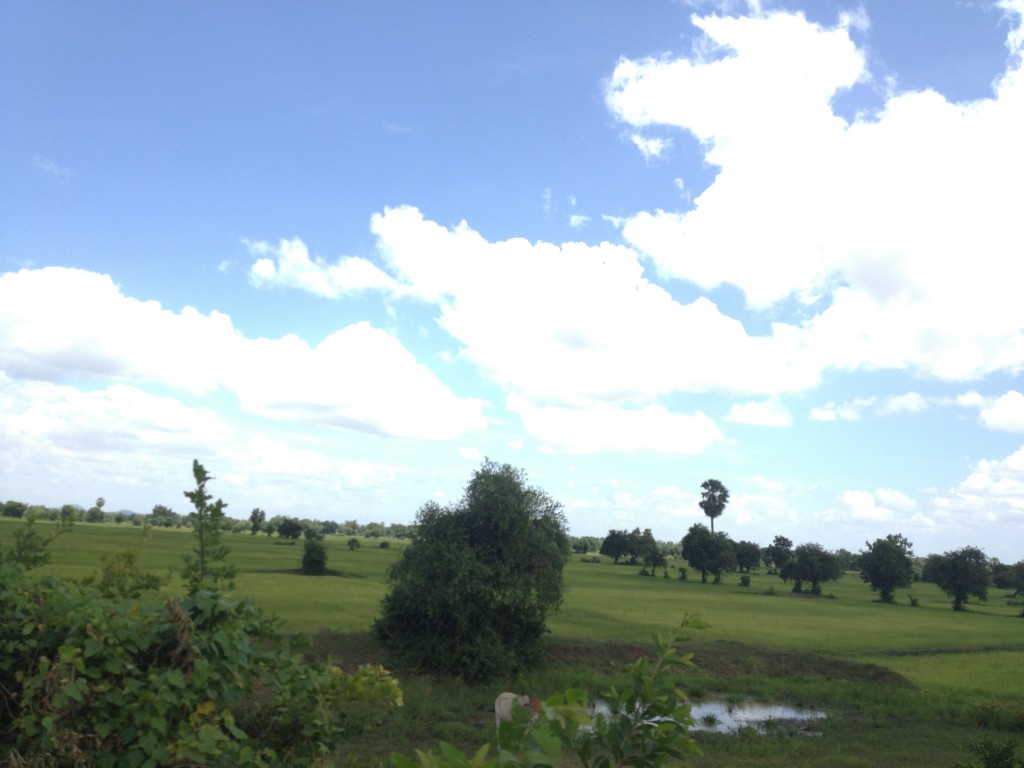 At the end of the line there’s a little village where you can chill out and wait for your return trip. I made friends with one of the kids, and he took me to the rice factory to show me how they clean and process rice. 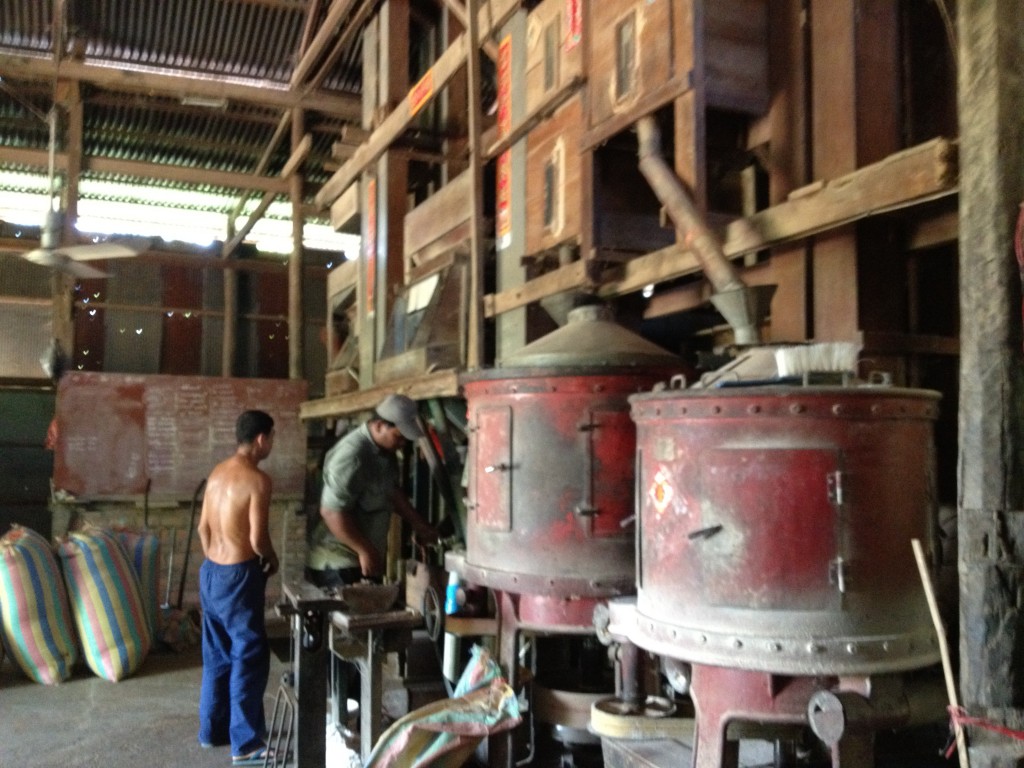 All in all, this is a MUST DO if you’re ever in town, especially as I’ve heard rumors that the train might close down for safety reasons. 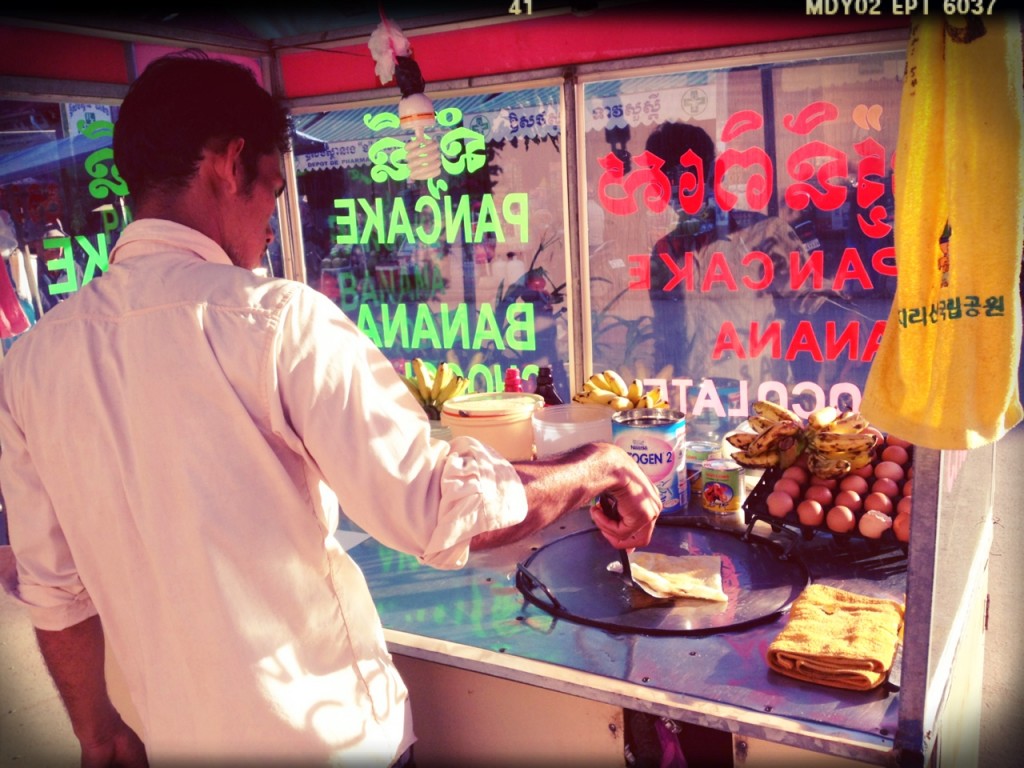 Waiting for your banana chocolate roti 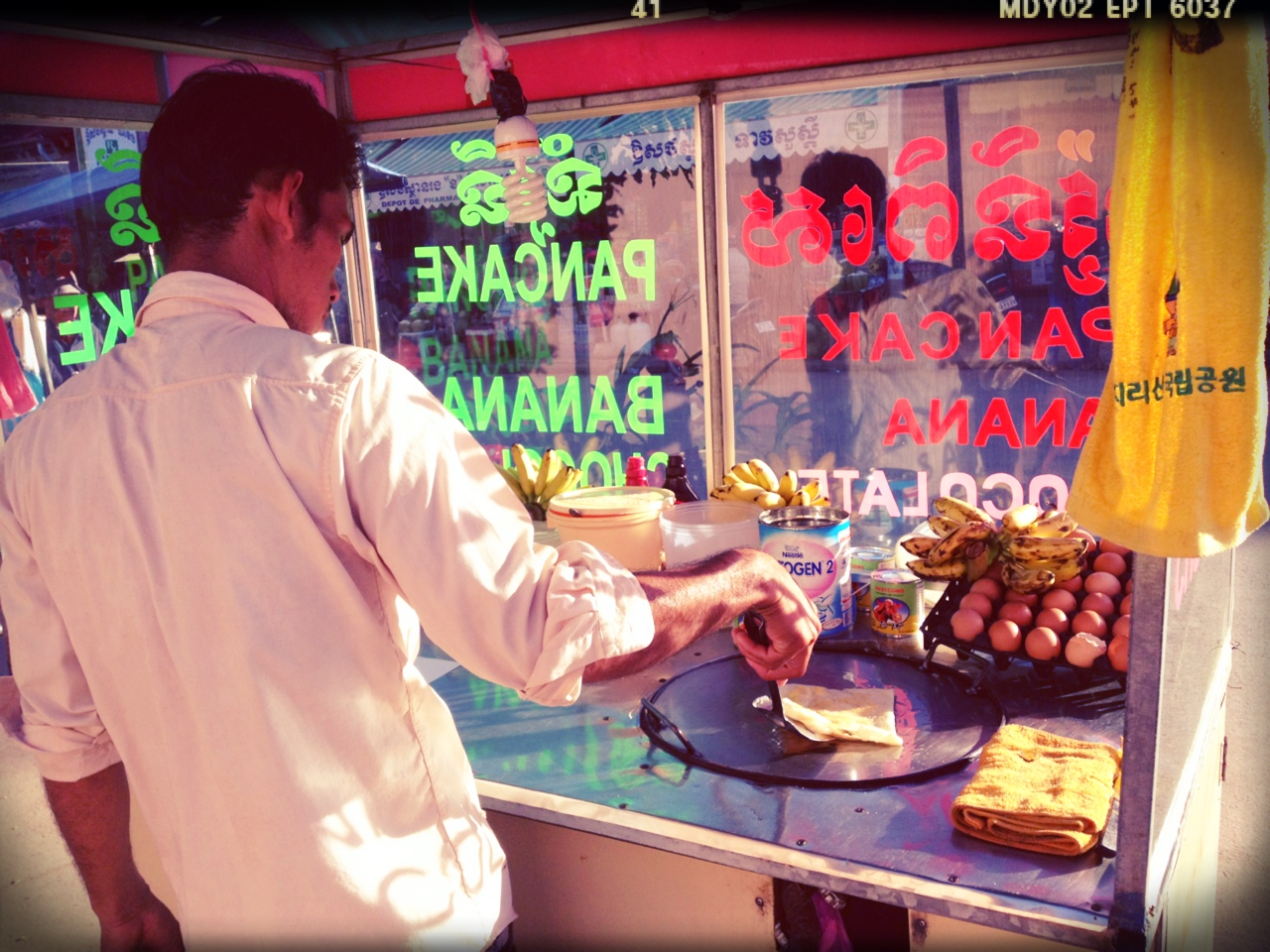