Well here we are. It’s August, but really it’s been several lifetimes since my last post.  Pandemic,  protests for racial justice… election madness… can 2020 just be over plz? Nope, seems like we’re just going to be in it for a while longer. The start of the protests in Philly were scary, with protesters being teargassed,  vigilantes coming out in my neighborhood,  and being kept up at night by ATMs being blown up. That has all died down, and recent protests have been peaceful here. Our own lives are fairly quiet and isolated, but I do think that we are slowly going insane.

Sometimes I think about the last time I did something “normal.” My last concerts before lockdown were Of Montreal and Destroyer. Ah, simpler times. Bernie was still a candidate then! Doesn’t that sound like forever ago?

The last dinner out we had before lockdown was Laser Wolf. There’s been a lot of hype around this opening, and I’d say it’s justified. It’s at the end of our block, and they’ve been doing a lot of takeout lately, so it’s funny, it feels more like one of our casual neighborhood spots than anything super hip or exciting.

And then lockdown started. Commence the hoarding.

It rains heavily and often here, which I actually like a lot. San Francisco didn’t have true thunderstorms. There are some unfortunate side effects, however. It was maybe around April when I started taking pictures of trees that had toppled over in my neighborhood. The storms are also deadly to the local wildlife, which is something that I’ve never noticed anywhere else I’ve lived. On my daily walks with Bogie we frequently come across dead baby birds all over the sidewalk.  Sad.

In May our close friend and occasional roommate Pravi moved out and joined the army. I felt ineffable sadness that things hadn’t worked out for her in Philadelphia, but a large part of that was just being reminded of how lonely I am out here. Later she told me that she saw this stint as a transition period. Mostly she had just needed to get out of the Bay Area. That helped me reframe things a little. Things hadn’t worked out, but that was never really the intent. At least Ryan and I were able to be good friends to her and help her move along in life.

The same week our friend left, I started a new job. It’s with a fully remote company, which was one of my career goals! Everyone is super nice and so far I’ve been impressed with how the company is run, and how they’ve handled things during this time of upheaval. They ended up on Inc’s  2020 Best Workplaces list, which lead to a lot of people messaging me on LinkedIn asking for a job.

There is a lot of autonomy and they’ve tried to slash meetings since folks are taking care of kids and whatnot, but it does make for a lonely start as a newcomer (see a theme here?). It’s hard to make strong coworker connections completely remotely. I was looking forward to meeting everyone at our retreat in September, but that got rescheduled to September 2021😞. I think if we weren’t sheltering in place, then it wouldn’t be so bad because I could get social interaction elsewhere.

We installed a custom made ladder to the roof. We now have roof access! Really thankful for all the outdoor space in this house – balcony, roof, backyard.

Oh, and the basement flooded. That was novel. Thankfully nothing was seriously ruined. Things were just musty for a few days. 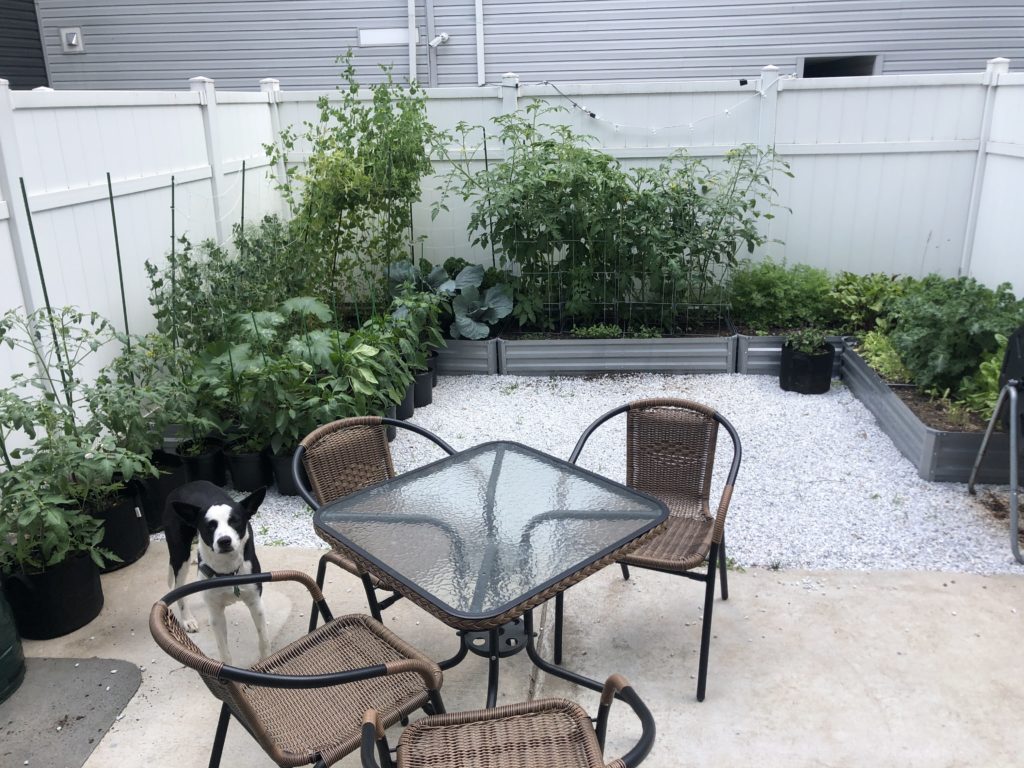 Ryan’s garden flourished, but the yield left something to be desired. STILL WAITING ON MY POTATOES. 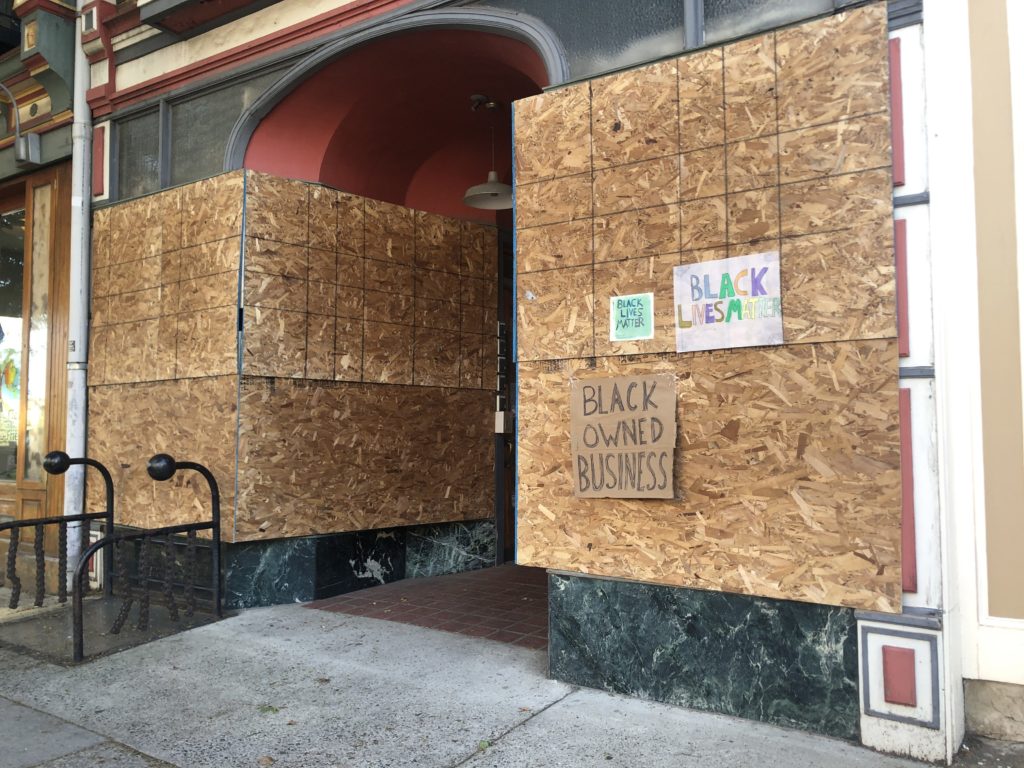 In June most stores boarded up to avoid looting and vandalism. I was pleased to see all the black owned businesses in my neighborhood, but it started to remind me of 9/11, when my dad put up an American flag sticker on his Jeep because he was worried his car would be vandalized.

For a few weeks, the police set up a command center in a strip club parking lot that I pass on my runs. There were dozens of police on bikes, buses, tanks, etc. It was super weird and lent an ominous feeling to the area. Then one day, it was all gone, just like that.

I buzzed my head. When on occasion people ask why, I say something like “Oh I’ve been cutting my hair myself since March, and this time it all went wrong, so buzz buzz.” When I said this to a TSA agent last week he said to me “Instead of saying it all went wrong, you should say it all went right. Looks good!” Isn’t that sweet?

For the summer I’m mentoring a Bay Area high school student through a nonprofit that posted on a programming website I read. The program is supposed to empower underprivileged youth with a growth mindset and help them get a leg up on college apps. So there’s a provided curriculum and a summer project. My role is to check in via videocalls every other week, and provide guidance where I can. Mentoring is one those things I’ve always said that I wanted to do. I’m glad that I’m trying it, but I don’t know if I’m actually being helpful or effective to my mentee. Not sure I’d do it again.

I finally got off my butt and cleaned up the sidewalk outside of my apartment, which was littered with everything from dirty diapers to used drug needles. It looked like a normal sidewalk for about 5 hours, before it was hit with trash tumbleweeds again. Thx Philly. Never change. Currently the city’s trash problem is even worse than normal . Lots of the sanitation workers are out with coronavirus, and the level of trash is up something like 25%. For a while pickups were running nearly a week late, and we haven’t had recycling pickup in 3 weeks. Sigh.

Just got back from closing out my San Francisco apartment. One roommate wanted to move out, and then the other two found a great deal on a new place due to pandemic pricing. It was bittersweet, but it was time. Maybe I’ll write some more about it once I’ve processed. Au revoir 14th st!

July 1 marked one year in Philadelphia. On good days, I think “This city is alive and has lots of opportunity for all types of people. It’s gritty, it’s real. It’s nice to see people of all ages, and not just tech bros in their 20s and 30s.” On bad days I think “This city thinks it’s hot shit, but really it’s a backwards shithole.” At this point, I feel like this city ticks off a bunch of things that I want “on paper,” but I do not vibe with the soul of the city AT ALL. If anything, I am actively repelled by the Philly stereotype – aggressive yet lovable assholes who love sports and do whatever they want because anything goes when there are no repercussions for bad behavior. This Eagles t-shirt illustrates the attitude, ugh.

Ok so for my anniversary I’ll try to end with something positive.

Top 10 things I like about living in Philadelphia so far