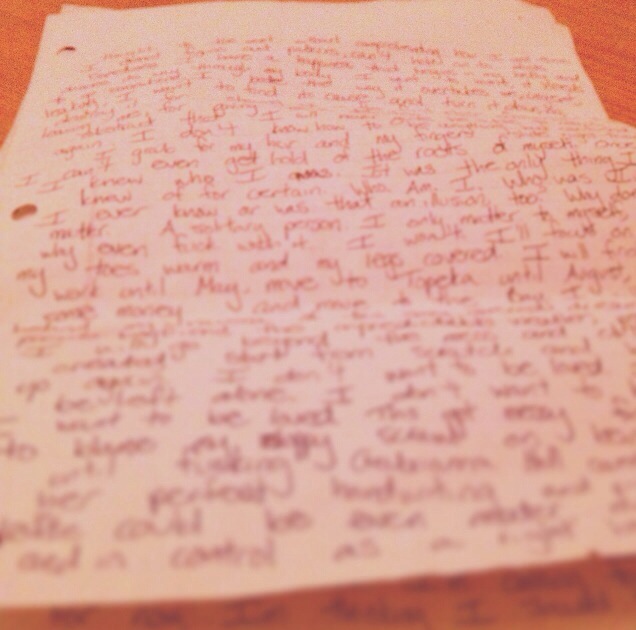 A couple of weeks ago I was lying in bed reading the internet on my phone, when I saw that  my friend Michelle had a new post up on her blog about goals and cream puffs. It’s a baking blog, so yeah I suppose that makes sense. The post is your usual blog end of the year recap and look forward, and while I knew ahead of time that Michelle had had a big year, for some reason reading about her multitude of accomplishments while staring at beautiful pastries that I could never have greatly discomforted me.

Why is it that my natural reaction to a friend’s success is sudden insecurity? Is it because I didn’t do something big like buy a house? No, I don’t even want a house.  I wasn’t sure, but then it was obvious.

In the back of my mind I was thinking of a certain “goal post” that I’d written earlier in the year. I was scared to look at it, to be honest. Yet when I did I was pleasantly surprised. I hit most of my goals. The ones that fell to the wayside had a heavy emotional investment, and as a result I didn’t get them done. Too fucking painful, surprise surprise.

I spent the last half of December pondering what my goals for the new year should be. Every time someone asked me what my resolutions were, I would make something up. Lose weight, increase my net worth maybe? Try as I might, it just felt like I was forcing it to play the game.

Truthfully, I know what I want. I just want this lost and wandering sadness to go away. I want my life to be busier and simpler, if that is possible. I want to start new creative projects and to make some money on the side. Try things, have them fail, or hopefully succeed. Move around, shake things up. What goal is that? I’m not sure how to articulate it.

A few days before I took off for the holidays I was cleaning out the kitchen pantry. I pulled out a few shelves to better sort through the contents. The hole in the cabinet revealed yet another mess, but there in between the plastic bags and the rat poop was an envelope! I reached in, pulled it out, and yes there was a real letter in the envelope, and it was dated to a former tenant of my apartment, circa 2003!!!

As a journal and letter addict I was in heaven. I don’t know how but I didn’t read it immediately. I waited until I felt ready, and read the letter with a glass of wine.

The letter was from a young woman living in Long Beach, and addressed to her male friend (and perhaps romantic interest) who lived in my apartment, of course. In the letter, which spans the course of several weeks and stops and starts mid-sentence multiple times, the woman talks about waitressing in Long Beach, missing family back home in Topeka, and wishing desperately for some sort of direction in life. You can feel her 20-something year old heart all bloodied up on the page, aching for someone to love and some place to belong. It was very dramatic in that special 20-something way. If this story had happened ten years later, I imagine that it would be posted on ThoughtCatalog.

The letter ended a bit breathless and confused, which meant that I felt breathless and confused as well. Whatever happened to this poor woman? Did she ever go back to school? Did she and he work out? Did she move to San Francisco? I am a person that needs to know the end of the story, even if the story is terrible. I mean, I read the entire 50 Shades of Grey because I HAD to know.

So I googled her. And while I can’t verify that it’s her, there is a person with her name living in the area, working at Google. And someone with her friend/former love interest’s name is now a poet living in Oakland. Hmmmmmmm…

My roommate suggested contacting the old tenant to return the letter (he’s quite active on Twitter), but I don’t know if he would want it. It was stuffed pretty far back there. Perhaps he was hiding it from someone? Also, and this is completely selfish, but I don’t want to break the illusion. I want to believe. I want to believe that that scared and confused and kind of angry woman is now a happy smiling outdoorsy woman who did go back to school, and she now works at Google doing not evil things. She takes the bus down every day and even though the commute is killing her, most other things in her life are pretty great. Every now and then she sees her ex and they have a $4 coffee as they talk about the past and more importantly the future.

So I read the letter, and reread it, and I keep thinking about the woman who wrote it. This is kind of cheesy, but finding her letter hidden in my kitchen feels like my end of the year miracle. For some stupid reason, I have hope that it worked out for her. That hope spills over into my own life. Whatever goals I choose for myself this year don’t ultimately matter. One way or another, things have a way of working themselves out in the end.

Previous: Knit: In Progress: Top Down Biggo Sweater
Next: Relationships/Separation/Identity and Dogs