First, a quick note: I decided to take down the last handful of soul searching posts, and a few here and there from the past. I try to be honest about the good and bad times of my life, but it was really annoying me that the sad times were just sitting there in a lump, like the clammy Denver airport burrito of my blog. So I set them to private for now, until I figure out what I want to do with them.Â Life is good in many respects, I’m just really really emo about everything that isn’t. Ok, onwards…

What was I going to say? Oh yes, something about printing. I played around with Jill’s linoleum printing kit over the holidays in Little Rock, and found the process quite fascinating. It’s a craft, to be sure.

Jill was kind enough to gift me with my own block printing kit, and I’ve taken a few days to think of what I’d like to make. Something that could be a card, I was thinking. Today it hit me- I wanted to do a deep-sea diving suit. I’ve always thought that they were quite beautiful, and there’s so much going on mechanically that you could give a sketch of one as much or as little detail as you like. Plus there’s that wonderful song by the Magnetic Fields. 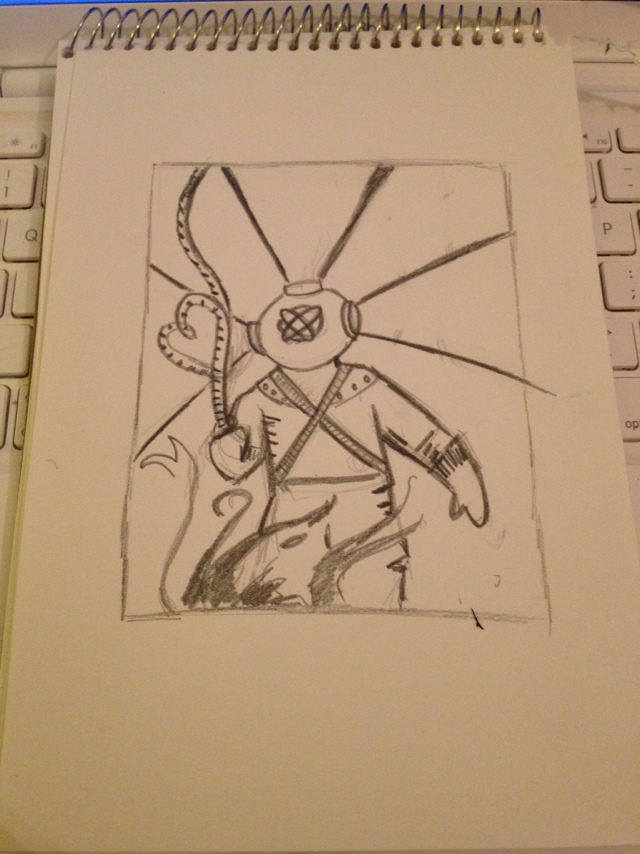 There were so many Google images of the suits online, but I was really drawn to the suits with the distinctive four openings around the head, with metal gratings. Also the brass looks so amazing against the soft and slouchy canvas, or whatever the heck the body is made out of.

Anyways, I drew a couple of sketches of different suits, but finally decided to go with this look. It’s low on details, but the simpler the better for my first time I think. I then went into overdrive with the pencil, so that I could make a good transfer to the linoleum.

Rubbing the paper onto the block with a spoon got some of the drawing over, but it was rather inadequate. I had to trace over and redraw quite a bit right onto the block. 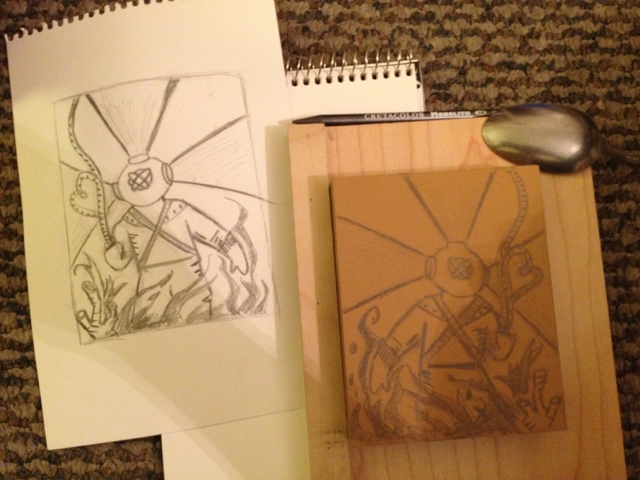 So the way that this works is- whatever I carve away will be white. I’m basically carving out a stamp. I’m still wrapping my head around the positive/negative space, and what I’d like the finished product to look like. All that said I think I will probably try to carve the black parts out, for simplicity’s sake. Doing the inverse seems very technically tricky.

I’ll definitely update once I start carving, but so far I’m pleased with the process.

Previous: Back to Basics
Next: On Failure